The archaeologist Gad Rausing is probably the only researcher who in fact have travelled Bjoulvs trail and demonstrated the geographical characteristics. He has published his findings in 1985 in the Swedish scholars’ review Fornvännen 80. The journey starts on Gutland and ends at Stevns on Seeland in Denmark.

It is clear that they sailed on the high seas, and after two days reached the country on a coast with high white cliffs and with capes that reaches far out into the sea. There is only one place in Scandinavia that fit with the description:

High white cliffs that juts out into the sea – a nearby beach to land on – and a paved road leading to the royal hall from late Roman times or early migration period – and that is Stevns Klint on Seeland.

On Gotland you can find the small towns of Rone and Ronehamn, and eight kilometers north of them lies the village Burs.

On the Jungshoved on south Seeland lies the village and the cliff Roneklint, and ten kilometers to the west is the small town Bårse.

South of Jungshoved is located the island of Farø and North of Gotland the Island Fårö, known as Faros in song four in the Odyssey and on pages 68-72 in the book Odysseus – Isse from the island Od and also under Documents and Links.

On Gotland there is a town Gothem twenty kilometers north of Östergarn, which perhaps is mentioned in the song five in the Odyssey and on pages 89 – 91 in the book Odysseus – Isse from the island Od. On the trail between Gotland and the Jungshoved lies the island of Bornholm with the small town of Gudhjem. This name is believed to mean Guters’ home. In 1547 the city was called Gudium.

A resident on the island of Gotland is called a gute, and the island's original old Gutnish name is Gutland. 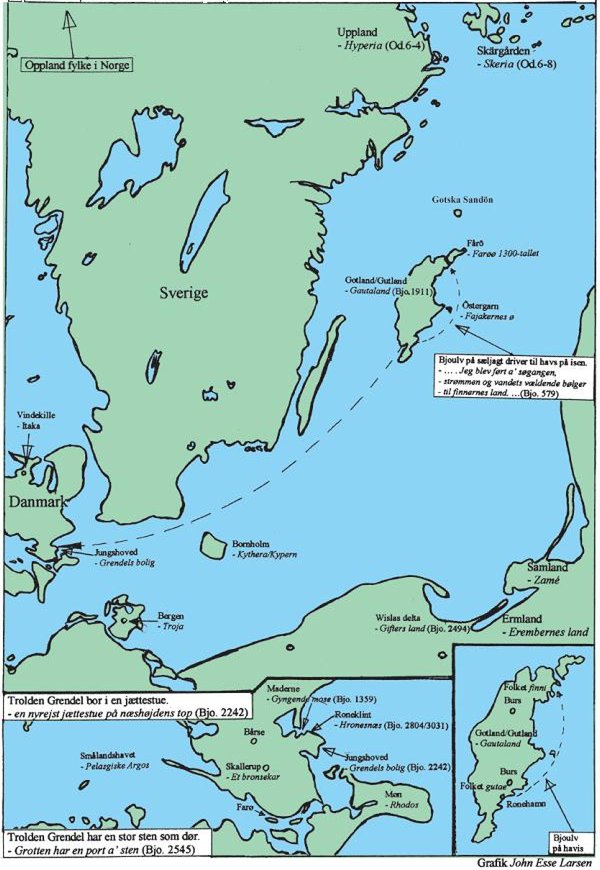