Finding Sites of the bronze lures

Sites of the bronze lures

The Iliad, the Odyssey and the Bronze Lurs are all in the same area

We have found 60 lurs in the regions around the southern Baltic Sea, the Belt Sea and Western Norway. From Denmark 37 lurs, Sweden 13 lurs, Norway 4 lurs, Northern Germany 5 lurs and Jaungulbene in Latvia one lure.

Most of the lurs are found in pairs with opposite bending. They can produce 8 – 9 tones in the same key. Rock carvings in Tanum show lure playing men two and two. Lurs sound a bit like trombones.

– That the Iliad and the Odyssey take place in the same area where the bronze lurs are found is a truly striking discovery. It is a confirmation that all interpretations on this site and in the book Odysseus – Isse from the island Od have an entirely correct basis.

In 1988 three fragments of a lure was found in a dung peat in Ulvkær Bog in Northern Jutland just south of Hirtshals. Through an examination of the peat was found two almost 1.75 meters long and nearly three kilos heavy bronze lurs.

These two lurs from Northern Jutland are the first pair of lurs found in Denmark since 1894.

Finding places of the Bronze Lurs 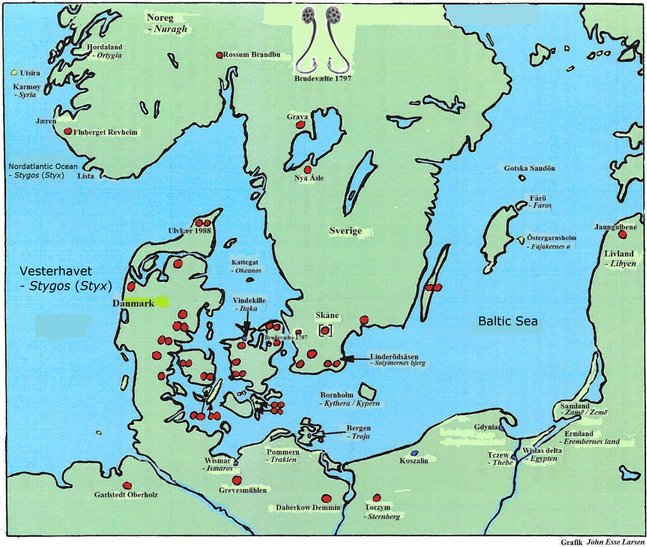