Sites of the Nordic type sword

The Iliad, the Odyssey and the Nordic type swords

are all in the same area

Bronze Age swords are all double-edged weapons – except the rare curving swords.

Almost all swords from Denmark's prehistory are from the early Bronze Age, where they emerged as a local form of 1600-1400 BC.

In this southern Scandinavian culture area around the Belt Sea where there are found more than 150 early time Nordic type swords. Outside this area we know only 12 swords which are distributed along the rivers Oder, Elbe, Weser and Rhine, and no further south than the Danube.

First in the Late Bronze Age after the battle of Troy 1235 BC on Rügen Nordic type swords occur in mainland Greece, Crete, Cyprus and Egypt.

In the latter part of the late Bronze Age 1300-1100 BC it becomes common that the grip on Nordic type swords consist of either horn or bronze washers. On particularly precious sword from the early and late Bronze Age the handle can be overlaid with gold.

The Iliad has this:

– We may capture Nestor’s shield, whose fame extends right up to heaven

The distribution of Nordic type swords in North-West Europe is a clear proof that this book's interpretation of the Odyssey and the Iliad is correct. 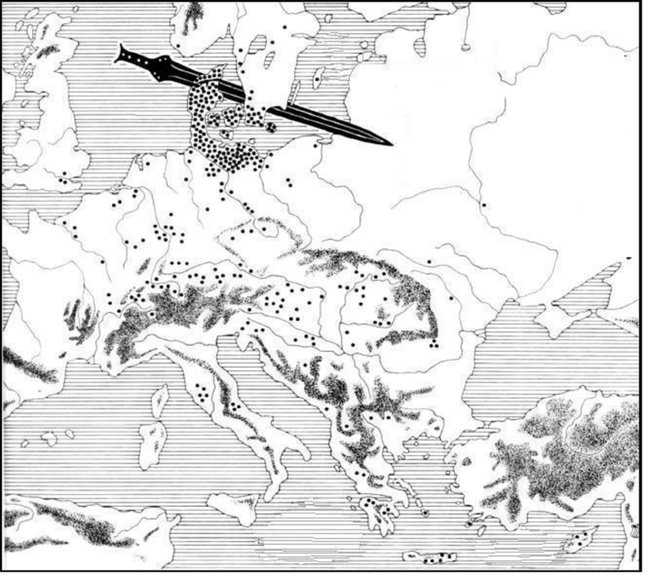