The Phaiakians in the Odyssey was a seafaring trading nation. They lived on the island Östergarnsholm close to Gotland in a prehistoric fortress. There are more such embankments on Gotland, and Visby the main town may originally have been a trading post and fortress from the Bronze Age. In the center of the city there has been found a settlement from the older Stone Age, 3300-2800 BC. The older Visby is enclosed by a 3600 meter long ring wall which had 29 towers, and 27 of them are preserved until today. It is one of the largest ring walls in Europe.

Similar strongholds as on Gotland can be seen 150 kilometers to the east in Latvia, among others Mezite, Satezetes Pilskalns and Tervetes Pilskalns. Pilskalns means town-height and ancient hilltop. The entire coastal land from the Gulf of Riga to the peninsula of Sambia in the Curonian Bay, were the original homeland Courland for the Curonians or Kurs. South of Samland is the lakeside landscape Ermland.

The Phoenician sealed industrial cities lay in the same way on small islands close to the mainland. For example, the city of Tyros who lay on a 57.6-hectare Island 700 meters from the mainland Lebanon. Carthage in Tunisia was founded from the Tyros.

Algiers (Arabic: al-Jazā’er) is the capital and largest city of Algeria, and was founded by Phoenician on four islands off the coast in the 8th century BC. Al-Jazaer means island.

There are many signs of old Gutnish influence on the coastal countryside around Courland and Samland. By Grobina near Liepaja in Latvia lies three large burial grounds, where the largest have clear old Gutnish origin.

Samland (Russian: poluostrov Semlandskij) is a 75 km long and 30 km wide peninsula. By Galtgarben are a high of 110 meters, and on the coast in the north and west, there are 60 meters high cliffs.

These three image stones are the oldest type and are timed to the 400 – 500-years. 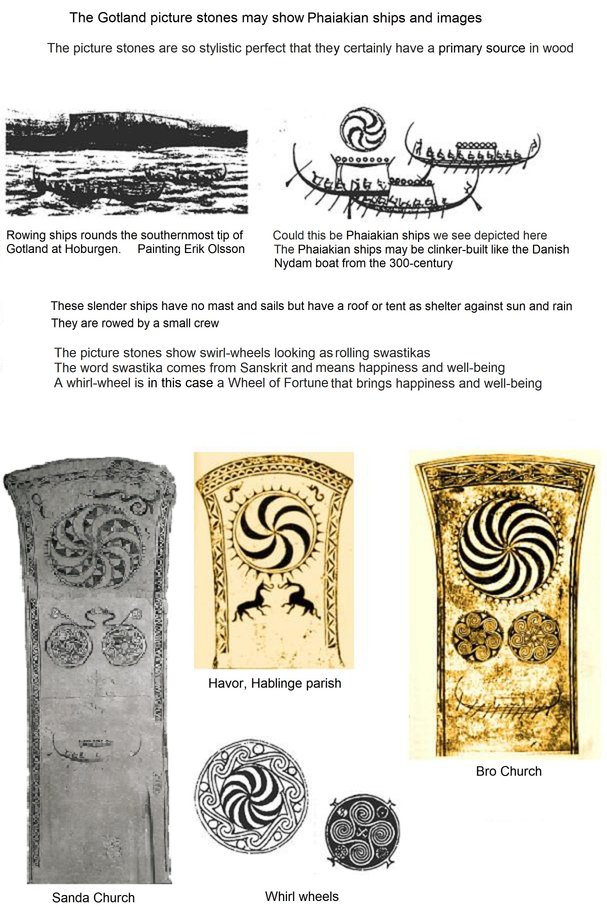