In the Odyssey, Odysseus comes to the island of Aeaea, that is the Green Island Eire:

– ... until we reached the island of Aeaea, where fair-haired Circe lived,

– fearful goddess with a human voice,

Aeetes (Also Ajetes) is called cunning because he once broke a promise to The Argonaut Jason – also spelled Iason and Iëson.

The goddess — or brothel mamma – Circe has her house on the west side at the fjord Lough Foyle in the fortress Grianan Aileach – or Aileach Neit. Odysseus sends the valiant Eurylochos away as leader for 22 comrades:

– In a forest clearing they found Circe's house

Around the house they see with horror the men which Circe has turned into wolves and lions and wagging dogs, all bewitched by Circe's wicked potions (Od.10-212). While they stand outside the palace, they can hear Circe sing with enchanting voice and all except Eurylochos go in to Circe and her maids. Things go wrong for Odisses’ (Odysseus) men here in Circe’s brothel and amusement Temple. They get drinks diluted with hallucinogens.

– and stirred into Pramnian wine.

– But with the food she mixed a vicious drug,

– so they would lose all memories of home.

– When they'd drunk down the drink she gave them, she took her wand,

– struck each man, then penned them in her pigsties.

This is truly a whorehouse with pleasure activities for sailors. They become confused and pliant, they play parlor-games where they dress in swine furs, groaning like pigs and allowing themselves to be locked up inside the pig pens, where they can sleep off their hangover.

Before his meeting with Circe in the palace Odysseus is on hunting and meets a huge stag with massive antlers:

– On my way back to our curved ship, some god pitied me

This sounds exactly like the fabled Irish giant deer or Irish Elk as the misnomer calls it. It is named giant antler and giant deer in English. The stag is an extinct deer (Megaloceros giganteus) which lived in Europe and parts of Asia 200,000 – 7,700 years ago. The Irish Elk stood about 2.1 meters tall at the shoulders carrying the largest antlers of any known cervid with a maximum of 3.65 meters from tip to tip and weighing up to 40 kg. Giant stag is almost as big as a moose, which have smaller antlers.

From Ireland, Denmark and Scania in Sweden we know of several findings of giant stag antlers. 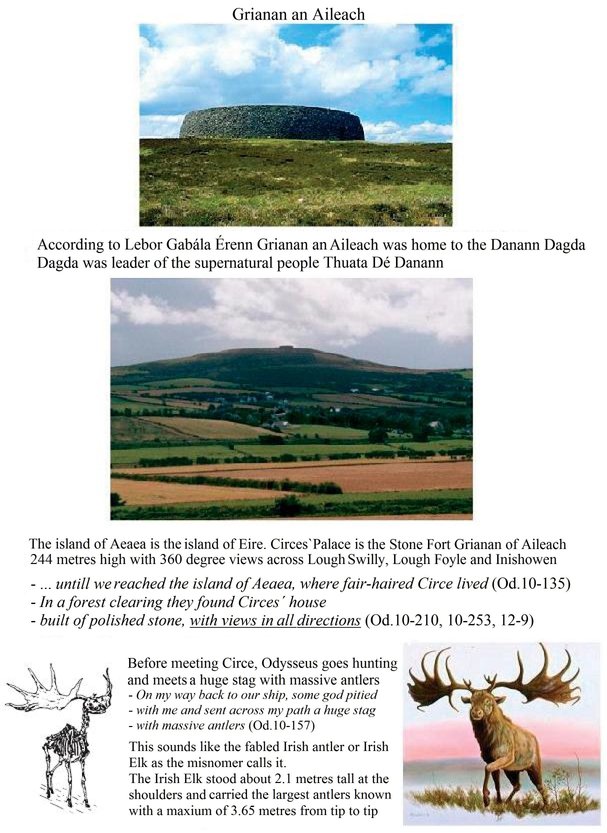