The legendary hero Odysseus was born on the island of Od in Northern Seeland – thence his name Od-ysseus. 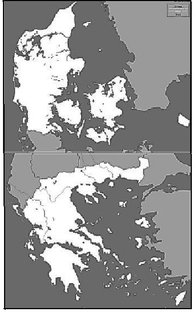 According to Homer in the Iliad, its people, cities and islands all together lie in the Greek archipelago-the Aegean. They do not lie in perfectly logical order when you follow chapter two in the Iliad's catalogue of ships.

There is a natural explanation to this.

If we move the map with the Danish Belt Sea down to the map with the Greek archipelago and fold these cards against each other, then they cover the same North-South and West-East. The Jutland peninsula settles over the Greek mainland, Northern Germany over Northern Greece, Western Sweden over Anatolia (Turkey), and Southern Norway over North Africa.

With the help of the Odyssey, the Iliad, and our knowledge about the main people's actual homes, we can place most towns and islands properly on the Nordic map. Some locations in the Iliad fall into place all by itself.

He was driven by a storm to the island from Troy – that’s the city Bergen on the island of Rügen.

The Battle of Brávellir and the raid against Troy is the same war.

He has sacked the German city Wismar – called Ismaros in the Odyssey.

He was a customer at the goddess Circe’s brothel in the fortress Grianan Aileach on the island Aeaea – up north on Éire (Ireland).

The Iliad tells the truth about Odysseus:

The book Odysseus – Isse from the island Od in Denmark on 202 pages with 24 maps explains and shows the correct historical truth about the legendary hero Odysseus.

The Odyssey and the Iliad takes place around 1230 BC around Seeland and in the southern Baltic Sea.

He and his son Telemakos had the same good nurse with the name Eurycleia.

Odisse (Odysseus) visits as a young man Parnas – Fornæs and goes on wild boar hunting with his grandfather Autolycos and his sons. Odisse (Odysseus) is attacked by a wild boar and gets a deep wound almost into bone in one thigh. It is grows back together again but Odysseus gets a nasty scar which is a visible sign that he must cover when he wants to hide his identity.

Odisse (Odysseus) marries Penelope and they live in Ithaca on Od in the current small village Vindekille in Od County. They get a son Telemakos who is born around 1240 BC. When Telemakos is about 10 years old the war starts against Ilion and its capital Troy. The war is called the Trojan War and is described by Homer in the Iliad. The Iliad focuses on the attack on Ilions’ capital town Troy.

The war draws out and unfolds into a campaign that lasts between 10 years and 20 years. Homer tells in the Odyssey that Odysseus is away in either 4 years, 10 years or 20 years, but these years are often based on rhyme and rhythm in the Odyssey. The Odyssey is depicted in hexameters, there are sixteen syllable rhymes. When the war starts it is foul weather with storms, cold rain and even light snowfall. This indicates the end of October-November in Denmark and Northern Germany on the Baltic Sea around 1230 BC.