Tafos was an island with seafaring traders, but unfortunately also with pirates. The Odyssey tells.

– I can tell you that my name is Mentes,

The swineherd foreman Eumaios purchased the slave Mesaulios on his own money from a buccaneer from Tafos (Od.14-449).

Penelope burst out in anger against the unpleasant suitor Antinoos, whose father previously:

– he'd joined with Tafian pirates to cause trouble for the Thesprotians

– He (Odysseus) is close by, still alive in the rich land of the Thesprotian (Od.17-526), and not so far from Ithaca, so obviously Tafos lies a little further away.

Tafos may be the island Tåsinge south of Fyn (Funen). It was an island up till today with peasants and seafaring traders.

The origin of the name Tåsinge is difficult to trace. There are three possibilities and none of them is completely convincing. We also do not know what the word Tafos means.

The Danish Census Book (Danish: Kong Valdemars Jordebog) from 1231 has Thosland and the Knýtlinga saga from 1260 has Torslundr. Because the Danish sources are lacking the r, the prefix can’t be the genitive of the deity Thor. Possibly the prefix is originally an island name *Thõs, which later got a – land attached to it. *Thõs might have a suffix-s attached to the Old Danish noun *thõ, Old Norse *thanhõ which links to the Gothic thãhõ – clay.

Another option is a noun thõs of uncertain origin and meaning 'marsh, scrub' or similar, a word that is part of Dutch and Flemish place names.

A third option is that Thosland is composed of the root in the Danish verb tø (thaw) + land. It provides an extended meaning 'the land by *thõs, in other words the waters with ice that dry. In this case the Svendborg Sound.

In this case the Greek word Tafos links with English thaw, with Old English thawian and with Old Norse theyja.

If the island Tafos in the Odyssey is Tåsinge, then *Thos in Tåsinge is a non- composite name. 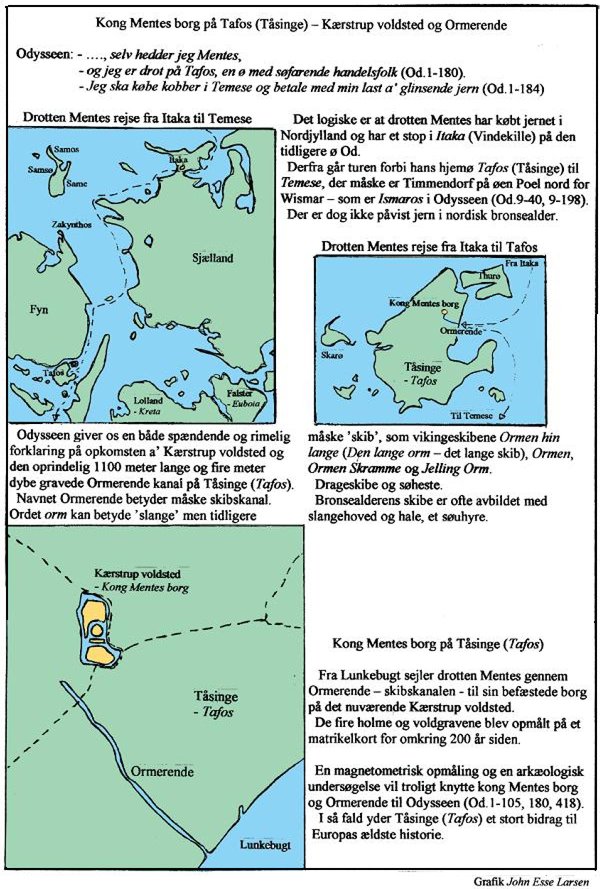