Menelaos tour round the Baltic Sea

Menelaos´ tour round the Baltic Sea

A storm from the West drives Odysseus shipwrecked from Troy – that is the town of Bergen on the island of Rügen – to the Phaeakian Castle on Östergarnsholm just east of Gotland (Od.5-35,288).

– The wind then drove our five dark-nosed ships over the waves and carried them to Egypt (Od.3-299).

They are cast from Troy on Rügen to the delta of River Wisla.

A strong wind from the South sends Menelaos to Libya (Livland) and later to the West to the island of Faros – that is the island of Fårö called Farø in the 14th century (Od.4-81,354).

– We’d endured so much while we were wandering.

– We made it home – it took us more than seven years.

– To Kypern, Egypt, and Phoenicia.

– We even reached the Ethiopians, Sidonians, and Erembi

– Libya too, where lambs are born with horns

Egypt – it is the river Wislas’ delta

Ethiopians – they live in Österlen around Kivik and the Kivik Tomb

Sidonians – they are Phoenicians

Erembi – they live in Ermland just north of the Wisla delta

Libya – it is the borderland between Estonia and Latvia

Odysseus and Menelaos in the Baltic Sea 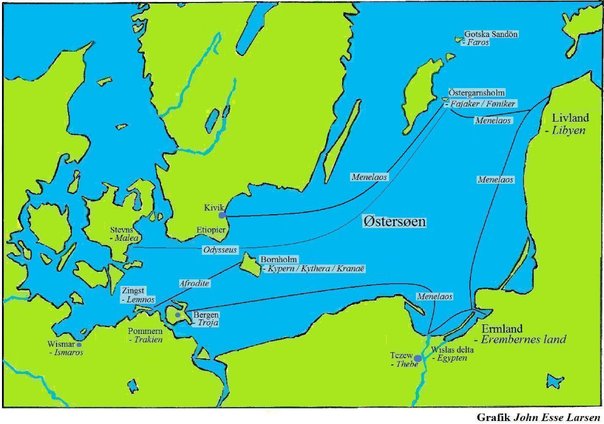 The Danish double name for Bornholm is the rock island Bornholm. The logical similarity is then:

– that Kythera and Rock Island is the same name.

– that pern and born has the same meaning in two different languages.

– that ky has the meaning holm and ø (Islet in all Nordic languages) in two different languages.

The rocky island of Bornholm is mentioned in the Iliad.

Paris from Troy says to the divinely beautiful Helen:

– not even when I first took you away from lovely Lacedaemon,

Paris is sailing from Sparta in Lacedaemon past Kranaë to Troy. Sparta is located in Northern Seeland at the town of Lynge. Kranaë (Greek rock island) is the island of Kythera – rock island Bornholm.

We can wonder whether the word krana has the same root as the nature stone granite.

Could it be that Greek Kranaë (Greek Κραναῇ) is equivalent to granitø – granite island.

The sure thing here is – that ky means holm or ø (English island).

There are three Danish islets named Kyholm and all three are close to Odysseus’ home on the island Od, and Od is pronounced exactly as the Norwegian word øy, which means island.

There is even a Danish island with all three words, namely: Kyø Holm in Nibe Bredning in the Limfjorden.

Kyholm in Stavns Fjord on Samsø (Samos), opposite Odysseus on his home-island Od

Kyholm in Egense Dyb in Odense Fjord, opposite Odysseus on his home-island Od

Just north of Bornholm – or Kypern – in the Baltic Sea lies the town Kivik with the Kivik Tomb from the Bronze Age.

After 1857 the buildings were demolished and the island is now uninhabited.

– We’d endured so much while we were wandering.

– We made it home – it took us more than seven years.

– To Kypern, Egypt, and Phoenicia.

– We even reached the Ethiopians, Sidonians, and Erembi

– Libya too, where lambs are born with horns

He came first to the Ethiopians. It is a people with two tribes in Scania.

Then he came to the Sidonians. That is the Phaeakians on Gotland.

The third people he visits is the Erembi who apparently live in Egypt, the delta of the river Wisla.

This corresponds with our historical knowledge. The Erembi live in the province of Ermland, which lies just north of the Wisla delta in the former East Prussia. Ermland and the Samland peninsula are also known as the amber coast.

This is an example of a double assimilation that ends with a bilabial assimilation. There are many examples of that, and here are three words – dumb, lamb and amber.