Odysseus tour in the North Atlantic

Odysseus' tour in the North Atlantic

In song 10 and 12 of the Odyssey Odysseus travels in the North Atlantic. Here he is used as a role figure in many stories:

1. As a customer at the goddess Circe’s brothel and amusement house on the island of Aeaea. It is the green island of Éire – also called Ireland

3. As a stranded sailor for eight years at Calypso in a gjogv (Cymric ogof ) on the Faroe Islands

4. To the high Laistrygones in Jotunheimen in Norway

5. Passing Skylla and Charybdis and a maelstrom near Bodø in Northern Norway

On one of his journeys Odisse – Odysseus – is coming to the island Aeaea. It is the Green Island of Eire – also known as Ireland. From there he takes a short trip to the Cymric people. It is the Cymric–speaking people in Scotland, England and Wales.

The goddess Circe has her palace near the fortress Grianan Aileach – or Aileach Neit – at the town of Derry. Upon his departure from the brothel mamma Circe he is warned about the dangerous Cliff Rockall in the midst of North Atlantic Ocean 350 miles west of the Scottish island of Kilda.

From the island of Aeaea (Eire) Odysseus sails out on the high seas to the northeast with the course for the Norwegian maelstrom Saltstrømmen – also Saltstraumen – just south of Bodø in Northern Norway. During the journey he comes past the island of the Sirens.

Around 1250 BC a man is stranded on the Faroe Islands, perhaps in the far north on Østerø. Maybe he is a sailor who is driven ashore after a ship’s wreckage. Maybe he is an Irishman or a Cymric speaking Scotchman, or a man from the Danaan people. Anyway, he is in all cases first found after eight dismal years in total solitude.

In the Odyssey, Odysseus is chosen to be this poor wind-driven man:

–I drifted for nine days. On the tenth night,

–the gods conducted me to Ogygia,

Another place in the Odyssey the drifting tour has been extended:

On his way to the Sun God's island Thrinacia Odysseus passes the monster Skylla and the maelstrom Charybdis.

He is, in fact, in northern Norway and rudders through Saltstraumen into the 192 square kilometer large Skjerstad Fjord. It is most secure to row past the foul Norwegian troll Skylla on the north side of the stream.

Odysseus does so even if he has to get past the Norwegian troll Skylla, who probably lives in a mountain cave on the north side of Saltstrømmen. 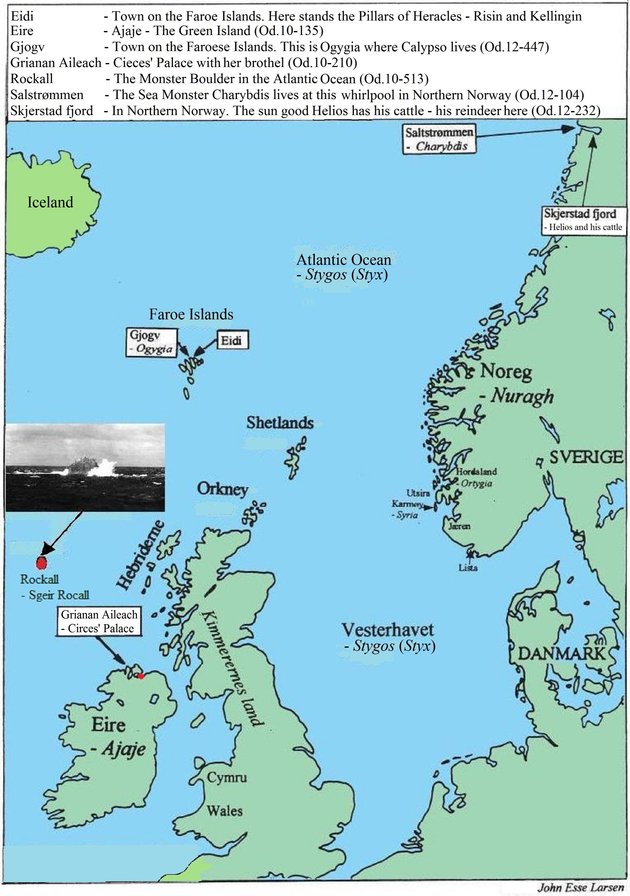