Odysseus tour round the Baltic Sea

Odysseus' tour round the Baltic Sea

1. –Odysseus’ foray against the town Ismaros – the town Wismar in Northern Germany

3. –his captivity at the giant Polyfemos. The Cyclops Polyfemos is named Grendel in

In the first episode Odysseus loots the seaport Ismaros, which is the modern North German town Wismar.

In the second episode Odysseus visits the land of the flower Eaters – the Lotofages, where his men take drugs and subsequently become passive and indifferent with the return journey.

The Arab – or rather the Persian-Indian – Sinbad the Sailor is also used as a role figure and is experiencing the same adventure on his fourth voyage in the Arab saga collection the 1001 Nights – the Arabian Nights.

Here both Odysseus and Sinbad the Sailor are role figures in an ancient Indo-European folklore – an urban legend of the past. The story does not exist in the Egypt of the Pharaohs or by the Sumerians.

In the third episode Odysseus is caught by the one-eyed giant Polyfemos. His men are eaten by the giant while he himself escapes by the use of guile and violence.

Here both Odysseus and Sinbad the Sailor are role figures in an ancient Indo-European folklore – an urban legend of the past. The story does not exist in the Egypt of the Pharaohs or by the Sumerians.

The one-eyed giant Polyfemos in the Odyssey and the monster Grendel in the Old English epic poem Beowulf is the same role figure.

Beowulf – in Proto-Norse Biowulfaz – in Danish Bjoulv – is the protagonist in an Old English epic poem. The poem mentions historical figures and people from the 5th century and the 6th century, and also an actual event around year 520 on Frisian area. It is recorded between the years 700 and 900 in the middle or North-East England.

The plot is briefly this:

The young Geat Beowulf, of noble family, is sailing with fifteen men over the sea to help Hroðgar, the king of the Danes, whose mead hall (in Heorot) has been under attack by a monster known as Grendel. Beowulf slays the monster and later his mother. He is rewarded and travels back to his home country Geatland, where he is King for fifty years.

Beowulf defeats a dragon, but is fatally wounded in the battle.

Beowulf is buried in a barrow:

–The whole troop rose in tears, then took their way 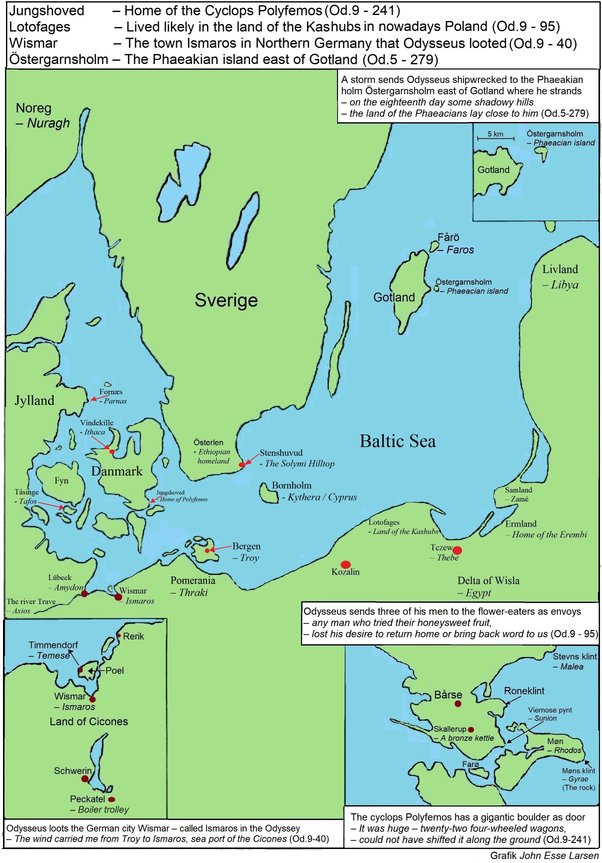 During the Danaan campaign against Troy, they have an ongoing problem to obtain food, clothing, weapons and everything for living. Merchant ships arrive with supplies for the troops, and they wanted to be paid. The troops were handed over to the free market economy, and their only option was to sell their spoils to the merchants (Il.7-473, 12-320).

On their way home from Troy – the city of Bergen on Rügen – Odysseus and his twelve ships sails or rudders to the west to the enemy town Ismaros (Od.9-40), which they plunder.

Ismaros is the city Wismar in the Pomeranian Lake District. Odysseus plunders the city Ismaros and steals:

In ancient times they usually mixed one part of wine with three parts of water. This suggests that the priest Marons’ temple wine was strong as the later time Klosterlikör (cloister liquor), and perhaps the first on the nowadays German soil. They produced true Germanic honey wine in Pomerania during the Bronze Age.

The story about the flowers eaters in chapter nine of the Odyssey spans 23 lines – hexameters, and begins as follows:

– but North Wind, sea currents, and the waves

– pushed me off course, as I was doubling back

For the nine days they drift over the sea and on the tenth day they come to the land of the flower eaters, the Lotus-eaters.

Malea is Stevns cliff on Seeland.

Kythera is another name for Kypern. The current name is Bornholm, which is located in the middle of the Baltic Sea.

With a course from Stevns past Bornholm – from Malea past Kythera – Odysseus has arrived at the coast northwest of the river outlet from Wisla, or perhaps all the way to the Curonian sea by the Samland peninsula near Kaliningrad and Lithuania.

Odysseus sends three of his men to the flower-eaters as envoys. They taste their flowers:

– The Lotus-eaters had no thought of killing my companions,

– but gave them lotus plants to eat, whose fruit,

– sweet as honey, made any man who tried it

– lose his desire ever to journey home

– or bring back word to us—they wished to stay,

– to remain among the Lotus-eaters,

– feeding on the plant, eager to forget

– about their homeward voyage.

– I forced them, eyes full of tears, into our hollow ships,

– dragged them underneath the rowing benches, and tied them up (Od.9-99).

The Odyssey refers in several places to poison mixtures and hallucinogenic drugs. When Odysseus and his men visit the goddess Circes’ brothel and amusement house his men get drinks diluted with hallucinogens (Od.10-213, 10-236). They become confused and pliant, they play parlor-games where they dress in swine furs, groaning like pigs and allowing themselves to be locked up inside the pig pens, where they can sleep off their hangover.

The divinely beautiful Helen, married to the king and commander Menelaos, also has knowledge of drugs and effectual remedies. She uses them when her husband Menelaos and his guest Telemakos are affected by grief and sadness.

– She quickly dropped into the wine they were enjoying

– a drug which eased men’s pains and irritations

Helene has got the drug from Tons wife Polydamna in Egypt:

– Every person there is a physician whose knowledge of these things

Even Helen herself was from Egypt, which in reality lies at is the river Wisla delta in present-day Poland.

Odysseus journey to the Cyclops Polyfemos

When Odysseus and his twelve ships have entered the shelter in Præstø Fjord:

– The island is not poor.

– It has soft, well-watered meadows by the shore of the grey sea.

– It has a harbour, too, with good anchorage,

This island could be Præstø (Priest’s island).

The next morning in the sunshine, they can see the smoke from the houses in the Cyclopian country, probably Jungshoved (Jungs head, knoll) which during the Bronze Age was an island too with a narrow land bridge to Seeland.

The cyclops Polyfemos lives in a cave with a gigantic big stone door. The entrance stone door is:

– Then he raised up high a massive boulder,

– and fixed it in position as a door.

– It was huge – twenty-two four-wheeled wagons, good ones, too,

And so on in chapter nine in the Odyssey.

It's just that Homer and other poets with him are using free imagination about the origins of the many chambered barrows found in Denmark and in the rest of Western Europe. There are no megalith tombs in Greece, so Homer has not known how Polyfemos grotto has looked like. In the age of Odysseus around the year 1200 BC the youngest passage graves in Denmark were around 2000 years old, no longer knew who built them and when they were built.