To the East of the sea is located the Wisla Delta, called Egypt in the Odyssey.

Nestor of Pylos and Menelaos of Sparta, Diomedes of Argos and Odisse (Odysseus) from Itaca – the same as the island Od – are starting their homeward journey from Troy at the same time (Od.3-159).

At this time, it has begun blowing up a storm and the cunning and clever Odysseus has interrupted his journey home and is sailing or rowing back to the commander Agamemnon in the area around Zudar (Od.3-163).

However, something goes wrong for Odysseus. He is knocked off course and driven all the way up to the Phaiakian Island – Östergarnsholm on Gotland.

At the far Northeast on Grogarnsberget on Gotland lies a prehistoric embankment Grogarnshuvud on a 32-meter-high cliff – a prehistoric hill fortress. The construction is large and bordered towards the inland by a 450 meter long and 6 – 8 meters wide dike of limestone gravel.

The Phaiakians may have had their protected trade and industrial zone in this great facility.

Further out in the sea in the east is Östergarnsholm with a prehistoric fortress surrounded by a low embankment of earth and stone, about 1.5 meters high and with a circumference of 380 * 195 meters.

On Östergarnsholm the Phaiakians could live protected against enemy surprise attacks.

Today the highest point on Östergarnsholms is 13.3 meters above sea level but at the Bronze Age the shoreline went around the twelve-acre fortress. The 936-meter-long dike has a width of four to five meters and the height of the palisade has probably been at least four meters. 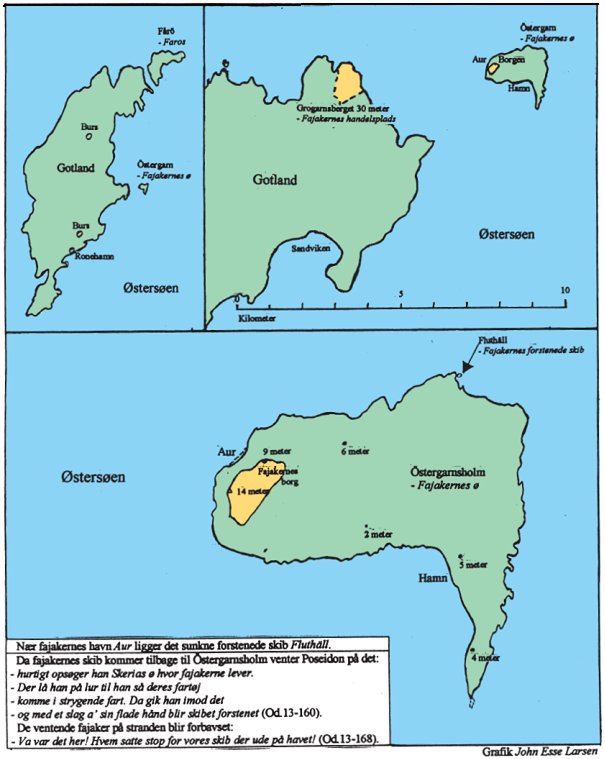 From Norrhudsviken in the north-eastern part of the island Östergarnsholm, the Phaiakian island – there is a reef out to sea where it ends with a large, oblong stone – Fluthäll. The reef lies in the ocean's surface, and the slab – the hällen – lay in the early 1900s just over the surface of the water. In the Bronze Age the stone lay about six meters below sea level.

Later on sea and ice has pulled the stone a little bit down, and now it can’t be seen so clearly any more. When you previously saw it from the sea, the reef faded away and only the stone could be seen. It looked like it floated on the water, the local fishermen said.

In old Gutnish: De var prisäis ti sei sum ha kunde flaute (It was precisely as if it could float).

Gutnish is the native language of the Gotlandic people on the island of Gotland.

The stone is described by Ingemar Olsson in the book Gotländsk natur och historia speglade i ortnamnen (Gotland nature and history reflected in place names).

The stone Fluthäll is spoken of in the Odyssey, where the Sea God and Earthshaker Poseidon will punish the Phaiakians because they always help people safe and secure home! And now they have helped Odysseus home. When their ship comes back to Östergarnsholm Poseidon is waiting for it:

– The Earthshaker Poseidon went to Scheria, home of the Phaeakians.

– There he waited. As their sea-faring ship approached,

– moving quickly on her course, Earthshaker came up

– and turned it into stone. With the palm of his hand

The waiting Phaiakians on the beach are astonished:

– "Who has fixed our swift ship out at sea

King Alkinoos now tells Nausithoos that his father was predicted that Poseidon one day would to turn his wrath against the Phaiakians because they always escort people safely home again.

When Persia in 480 BC during Xerxes invades Hellas their fleet is defeated at Salamis. In reality, the Persians have no fleet in the Mediterranean. They sail their troops and maintenance on Phoenician ships.

Of course, against payment.

It's amazing that the Odyssey and the Iliad can tell both about Fluthäll on Gotland (Od.13-160), of the monster cliff Rockall in the North Atlantic Ocean 350 kilometers west of Scotland (Od.10-515), and of the hilltop Hoch Hilgor on the island Samotrake – that is the Peninsula Lebbin at the island Rügen in the Baltic Sea (Il.13-11).