Polyfemos and Grendel live in a passage grave

Polyfemos and Grendel live in a passage grave

Odysseus journey to the Cyclops Polyfemos

When Odysseus and his twelve ships enter the shelter in Præstø Fjord:

– Our eyes could not catch any glimpse of land

– or of the long waves rolling in onshore,

This island could be Præstø (Priest’s island).

The next morning in the sunshine, they can see the smoke from the houses in the Cyclopian country, probably Jungshoved (Jungs head, knoll) which during the Bronze Age was an island too with a narrow land bridge to Seeland.

– At the harbour head there is a water spring –

This may be the little clear creek Tudbæk flowing out to the South of Præstø.

The cyclops Polyfemos lives in a cave with a gigantic big stone door. The entrance stone door is:

– It was huge – twenty-two four-wheeled wagons, good ones, too,

The giant Polyfemos is working quickly:

– He was working these tasks in a hurry,

He keeps Odysseus and six of his men as captives. His men are eaten by the giant while he himself escapes by the use of guile and violence.

And so on in chapter nine in the Odyssey.

It's just that Homer and other poets with him are using free imagination about the origins of the many chambered barrows found in Denmark and in the rest of Western Europe. There are no megalith tombs in Greece, so Homer has not known how Polyfemos grotto has looked like. In the age of Odysseus around the year 1200 BC the youngest passage graves in Denmark were around 2000 years old, no longer knew who built them and when they were built.

We know of no less than 23,000 megalith tombs – dolmens and passage graves — in present-day Denmark and 3216 is preserved and protected today. 1229 of them can be seen on Seeland, most of them in Northern Seeland and Central Seeland.

The fire-breathing monster Grendel — and Roneklint

Beowulf – in Proto-Norse Biowulfaz – in Danish Bjoulv – is the protagonist in an Old English epic poem consisting of 3182 alliterative long lines. The poem mentions historical figures and people from the 5th century and the 6th century, and also an actual event around year 520 on Frisian area. It is recorded between the years 700 and 900 in the middle or North-East England.

It was first published in its entirety in the 1815 edition prepared by the Icelandic-Danish scholar Grímur Jónsson Thorkelin. Nicolai Frederik Severin Grundtvig reviewed this edition in 1815 and created the first complete verse translation in Danish in 1820.

The plot is briefly this:

The young Geat Beowulf, of noble family, is sailing with fifteen men over the sea to help Hroðgar, the king of the Danes, whose mead hall (in Heorot) has been under attack by a monster known as Grendel. Beowulf slays the monster and later his mother. He is rewarded and travels back to his home country Geatland, where he is King for fifty years.

Beowulf defeats a dragon, but is fatally wounded in the battle.

Beowulf is buried in a barrow:

–The whole troop rose in tears, then took their way 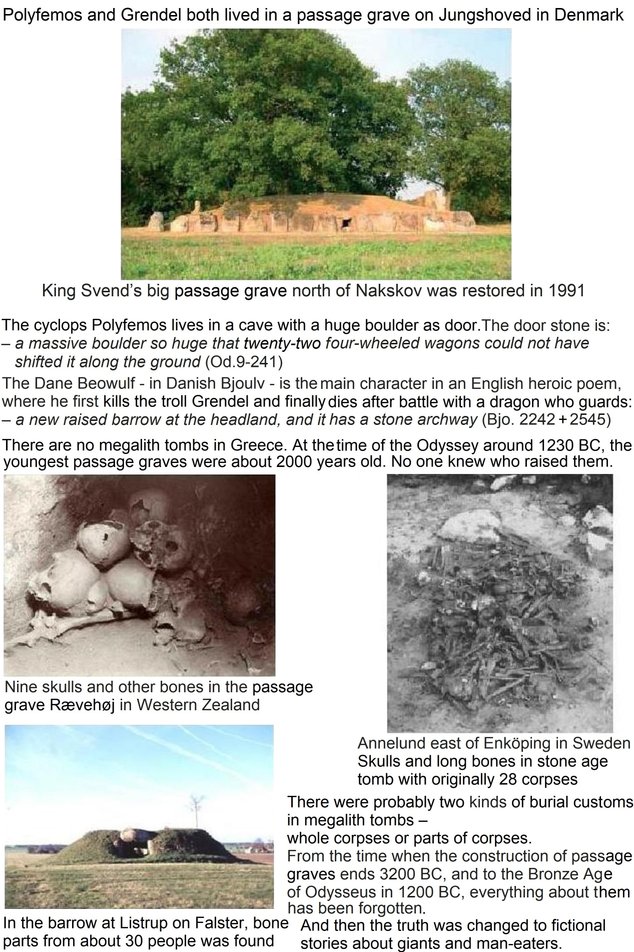