Rockall – The monster boulder in the North Atlantic

Rockall - the monster boulder in the North Atlantic

When they leave Aeaea – Ireland – Circe tells them that they will travel over the swirling waters of Oceanos to a place where:

– which branches off the river Styx, flow into Acheron.

The three underground rivers are in English translation:

The river Styx means Hate, Detest. Styx is the Atlantic Ocean. The adjective stygian has come to refer to anything dark, dismal, and murky.

It all sounds like a weather report for the North Atlantic on a really bad day.

The words Oceanos’ swirling waters and the dangerous stygian waters sound like the ocean currents along the west coast of Scotland. Should your ship become damaged here, then you would drift either against the often inhospitable Scottish West Coast or Northeast out into the North Atlantic. If you live long enough you might see Northern Norway see at a distance.

There are many rocks, islets and reefs off the West coast of Scotland, and the most famous and feared is the uninhabited rocky boulder Rockall which lies 350 kilometer west of Kilda right on the North America route.

The origin of the name Rockall is uncertain but is believed to be Scottish Gaelic Sgeir Rocail meaning ‘sea rock of roaring’ or ‘skerry of roaring’ – from Old Norse sker, a small or large granite boulder or islet lying in the water.

The Gaelic word skerry comes from Old Norse sker. The modern Nordic word is skär as in skärgård.

It's amazing that the Odyssey and the Iliad can tell both about Fluthäll on Gotland (Od.13-160), of the monster cliff Rockall in the North Atlantic Ocean 350 kilometers west of Scotland (Od.10-515), and of the hilltop Hoch Hilgor on the island Samotrake – that is the Peninsula Lebbin at the island Rügen in the Baltic Sea (Il.13-11). 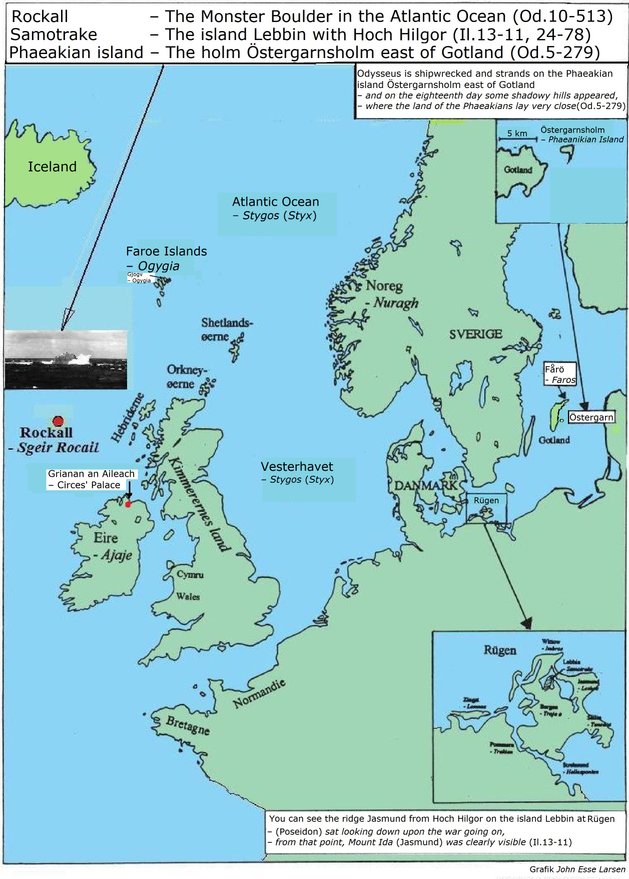