Sgeir Rocail – The roaring Rockall in the North Atlantic

The roaring rock in the North Atlantic

There are many rocks, islets and reefs off the West coast of Scotland, and the most famous and feared is the uninhabited rocky granite boulder Rockall which lies 350 kilometer west of Kilda right on the North America route.

The origin of the name Rockall is uncertain but is believed to be Scottish Gaelic Sgeir Rocail meaning ‘sea rock of roaring’ or ‘skerry of roaring’ – from Old Norse sker, a small or large granite boulder or islet lying in the water.

The Gaelic word skerry comes from Old Norse sker. The modern Nordic word is skär as in skärgård.

The area around Rockall is relatively shallow, almost 30-60 meters. But about three kilometers east of the peak Rockall St. Helens reef is lying. The reef is a pointed crest in the middle of the Atlantic, 1.4 meters below sea level at the highest point. On most naval maps the reef is just inscribed as a point and the digits 1.4 meters.

Between Rockall and Scotland there are strong ocean currents that go north-ward, and always tidal currents. Here at position 57°35'48" North, 13°41'19" West the boulder Rockall stands as a monster in the middle of the Stygian River – the dark and murky mean water. It may be against this rock that Circe on Aeaea (Od.10-513) warns Odysseus.

On 28 June 1904, a Danish emigrant ship D/S Norway runs over St. Helens Reef, sinks, and 620 people drown, most of them from Norway. Eight years later, on April 14 1912, the passenger ship Titanic sinks at Newfoundland and 1,500 persons die. 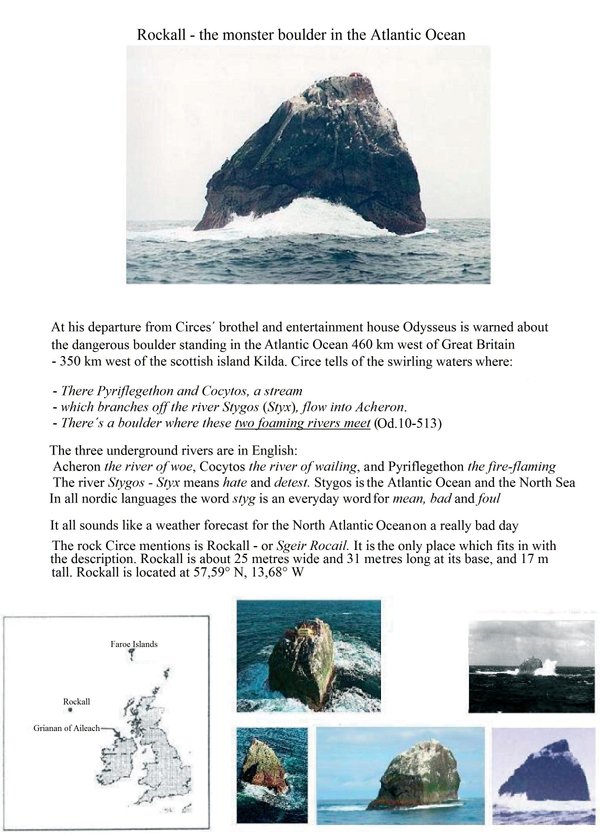