Four commanders start the return journey from Troy together (Od.3-159)

Nestor is going to Pylos, Græse at Frederikssund (Od.1-284)

Agamemnon of Mycenae is waiting for departure (Od.3-156) 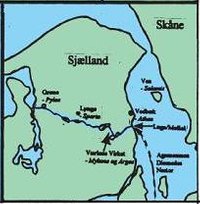 The four commanders are sailing to Northern Seeland, where they sail into the river Lugen just south of Vedbæk.

Odysseus is sailing to the island Od in Northwestern Seeland.

The river Lugen is the current Mølle River which is mentioned in the 12th century. The name Lugen means the still and quiet as the Swedish word lugn – calm and quiet. Icelandic and Norwegian logn – calm and smooth as a mirror. The pronunciation is closest to longn.

The Bronze Age sailors could row up the river Lugen into the country all the way to Sparta just south of the present day city of Lynge.

A storm is blowing Menelaos to Egypt (Od.3-300) in the Wisla delta, and a later southerly storm sends him up to the North of Gotland to Fårö (Faros, Od.4-355). Here a prolonged Western wind keeps him and his men as shipwrecked on Fårö (Faros) for twenty days (Od.4-360) before the wind turns around and he manages to get back to the Wisla delta (Egypt, Od.4-483).

The description of Faros (Fårö) in the Odyssey fits perfectly with Gotska Sandön which lies 38 kilometers north of Fårö. It is nine kilometers long and six kilometers at its widest point.

Menelaos has landed on the beach on the northeast side of Gotska Sandön at Källahamn – Spring Harbor – near Säludden (Cape Seal).

The 36 square kilometers large island consists of sand and vegetated sand dunes, and the island's only source of drinking water can be found at Källahamn.

– There’s a harbour (Källahamn) there

– with excellent moorage, and from that spot

– once they have taken on supplies of pitch-black water.

– For twenty days the gods detained me there.

– Not once was there a favourable wind,

On the beach from Källahamn to Säludden large flocks with seals gather, and the island was formerly a place of for seal hunting.

– that infallible Old Man of the Sea (The Sea God Protevs)

– emerges from the brine, where he’s concealed, 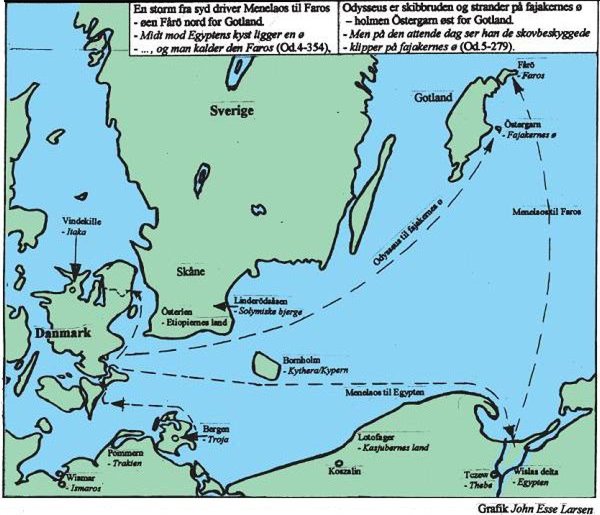 – The Locrians from eight cities were led by swift Ajax, the lesser Ajax.

The Thracians soldiers have a similar hairstyle.

The rock at Gyrae – the Cliffs of Møn

In the middle between the white cliffs on Jasmund on Rügen and Stevns klint on Seeland lie the tallest cliffs at the Baltic Sea, the gleaming white chalk cliffs of Møn. They are ten kilometers long and over 100 meters high on the highest places. A really spectacular view when coming across the sea and the Sun is shining from the East.

On the island of Faros the Sea God Protevs tells Menelaos how the return home from Troy went for his brother Agamemnon and the Locrian commander Ajax the lesser. A storm drive them toward the rock at Gyrae and Ajax the lesser dies. He was close to his home country, Northwestern Falster.

Agamemnon is drifting past the Cliffs of Møn and on up through the Sound (Øresund) against the steep height at Malea – the cliff of Stevns. He manages it all the way at home and there he is murdered by Aegisthus, the lover of his wife, Clytemnestra. Her sister is the divinely beautiful Helen. 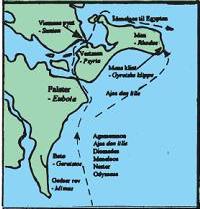 The commander Ajax the lesser makes it up on a cliff, where he boasts that he has made it by himself despite the will of the gods:

– picked up his trident and then brought it down

– on that rock at Gyrae, splitting it apart.

– One piece stayed in place – the other one sheared off and fell into the sea,

– He fell down into the endless surging waves

The word gyrae is weakly related to the word for gypsum (Plaster). Latin gypsum originates from Greek gy´psos (γύψος) – chalk, of uncertain origin.

Many Danish school children used to hold a piece of the cliffs of Møn in their hand when they write on the blackboard. Today the chalk is actually from Fakse limestone quarry located inland the country at Stevns.

Møn is mentioned in the Iliad, there the name is Rhodos:

-... the Cretans from the chalky Lykastos

The chalky white mountain-capital Kameiros is very likely the fortress Timmesø Hill which is located on a 113 meter high hilltop in Klinte Forest (Klinteskoven) on the island of Møn. The fortress is located one kilometer west of the cliff at the Queen's Chair (Dronningestolen) and a mile north of the small town of Busene.

Timmesø Hill is an ancient rampart from the Bronze Age with three embankments built of chalk from the cliff Møn – the Gyraean Rock.

The chalky white mountain-city of Kameiros in the Iliad has been a really spectacular sight in the Bronze Age.