Telemakos travels to Sparta on Seeland

In the absence of Odysseus his son Telemakos travels without the intruding guests knowing it to Nestor in Pylos and Menelaos in Sparta. His journey is described as he sails or rows his boat from Ithaca (Od County) to Pylos (Od.3-4), which is located next the Græse River, probably near the small town of Græse on the heights at Frederikssund.

In Pylos he borrows a chariot from King Nestor and travels further past to Ferai (Od.3-481), which probably lies near Slangerup. Ferai – or Slangerup – lies naturally at a crossroads for maritime traffic West-East on Græse River, and for land traffic North-South. A good place to require ‘customs’ from travelers passing by.

In the course of the day Telemakos and Nestor's son Pisistratos come to King Menelaos in Sparta (Od.4-1), located in Lakedaimon. Lakedaimon is likely the surroundings around Lake Bastrup and the towns of Lynge and Ganløse.

Telemakos sails or rows his boat from Ithaca to Pylos (Od.3-4) – from Vindekille to Græse at Frederikssund.

He borrows a chariot in Pylos from Nestor and drives past Ferai (Od.2-481) – or Slangerup.

During the day he comes to King Menelaos of Sparta (Od.4-1) – near Bastrup and the towns of Lynge and Ganløse. 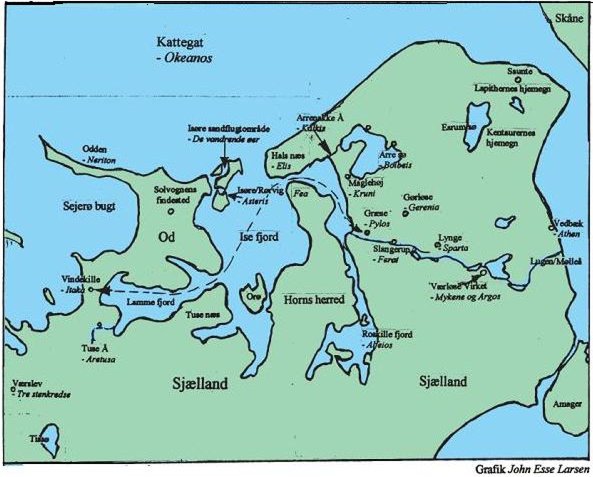 The suitors of Penelope, also known as the Proci, are planning to assassinate Telemakos on his journey home and are setting up an ambush on the island Asteris (Od.4-845).

This island has a port with two outlets. Asteris and its harbour can only be Isøre and Isøre Port to the northeast of the island Od. The island Asteris is located to the west of the outlet from Ise Fjord into Kattegat.

It was called Isøre during the Viking age, and the two early Danish historians Sven Aggesen and Saxo claims at the end of the 12th century, that it was an old Danish custom to elect Danish Kings on Isøre Thing.

Telemakos sails home from his visit to Pylos and Sparta – Græse and Bastrup.

– They made for Pheae, driven on by winds from Zeus,

– and for fair Elis, where Epeians rule. 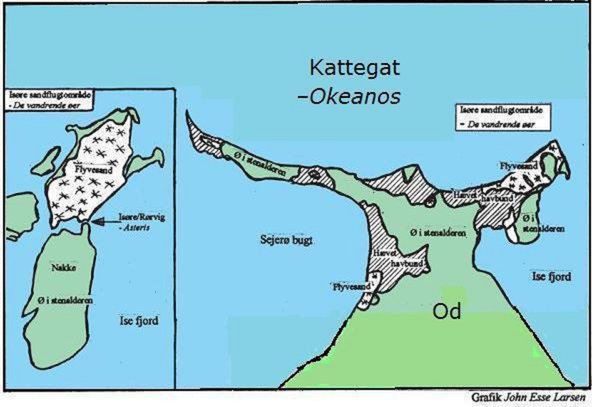