The Danaan islands Seeland and Arcadia

The Danaan islands - Seeland and Arcadia

Mycenae is the strong fortress Mycenae (Il.2-569) in Hareskov on Northern Seeland behind a 26 kilometer long stone wall (Il.2-559).

This embankment of stones are encircling Hareskov and the cities Mycenae, Argos and Tiryns in the Iliad.

West of Mycenae at the town of Lynge in Northern Seeland is Sparta and there lives:

Mycenae lies in Hareskov on Seeland 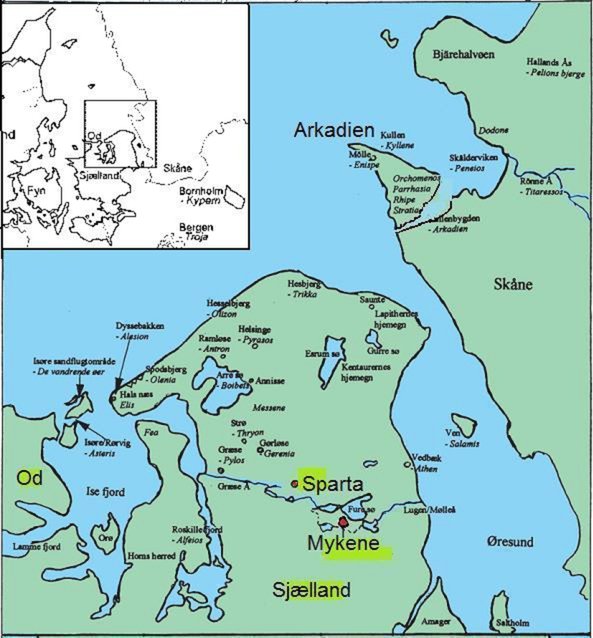 Sparta and Mycenae lies in Hareskov

Arcadia was an island in the Sound (Øresund) in the Bronze Age 1200 BC.

– near Aepytus’ tomb, where men excel in combat,

– hand to hand, troops from Pheneus, Orchomenus, rich in flocks (Of sheeps),

– men from Tegea, lovely Mantinea, together with others

– from the highland Parrhasia and Stymphelus, the town by the sea (Il.2-608)

They have borrowed sixty ships from Agamemnon from Mycenae. The Arcadians are mentioned only once more in the Iliad, and not because of the war.

The steep rocky Kyllene is the headland Kullen in Scania, Arcadia is Kullabygden with the pastures of Orchomenus, and the heights Parrhasias is in the southeast on Kullabygden.

The height Håkull on Kullaberg is 188 meters high.

The windswept town Enispe can only be the small port Mölle, where it often blows a fresh westerly wind with long and smooth waves.

Mölle Bay is one of the best places for wave surfing in Scania. 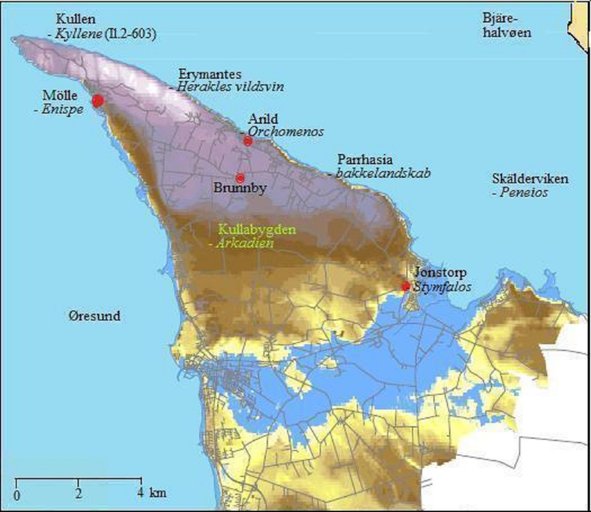