The Iliad in Fossum – Paris shoots an arrow in Achilles heel

in the great Achilles’ heel – his Achilles' heel

The archer prince Paris of Troy stands to the left of Achilles’ (Egil) feet, and shoots a mortal shot in his heel. Notice his bow:

- Paris is busy with his shield and body armour – polishing his curving bow (Il.6-322).

Paris has once before shot an arrow against Diomedes.

- The arrow hit Diomedes’ foot, the right one, on the top—it passed through and drove deeply into the ground (Il.11-377). 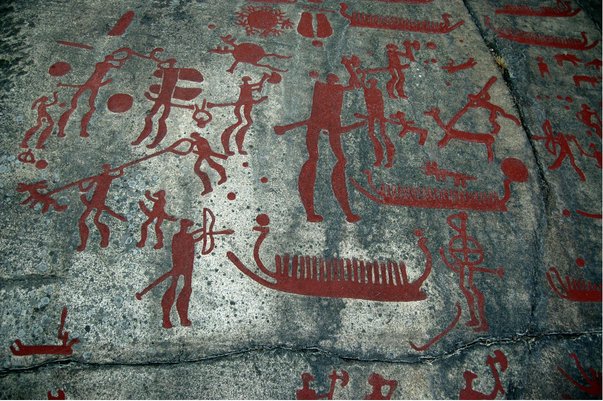 Achilles with the Nordic name Egil dies from an arrow in his heel – the only place he is vulnerable.

The fatal shot came from the archer Paris to the left of his foot on the rock-carving. Paris hits his Achilles' heel.

His death is described in the Aethiopis fragment 1, a supplement to the Iliad. Achilles runs after the Trojans into Troy where he gets an arrow in his heel shot from the God Apollo looking as Paris. Troy is the city of Bergen on the island Rügen in the Baltic Sea.

The Amazon (Hermaphrodite) Penthesilea is the last Achilles kills after hard battle at Troy. He loses his head at the beginning when he sees her/his beauty but pulls himself together and kills Penthesilea.

The cowardly and ugly Thersites (The name could mean 'cheek ') derides Achilles:

- That he fell in love at first sight with the woman/man Penthelesia.

Amazons are probably hermaphrodites. They often live secluded and alone. They get respect and fellowship as amazons. Rather die standing on the battle field than live on the knees at home.