The Iliad in Fossum – The commanders Diomedes Odysseus and Agamemnon

Diomedes gets an arrow through his right foot

Odysseus gets a spear through his breatsplate and into his ribs

Agamemnon gets a spear through his forearm

Diomedes, Odysseus and Agamemnon are fighting hard in book eleven in the Iliad.

- The arrow hit Diomedes’ foot, the right one, on the top—it passed through and drove deeply into the ground (Il. 11-377).

– Socus’ spear struck through Odysseus’ breastplate, slicing off the flesh along his ribs (Il.11-435). 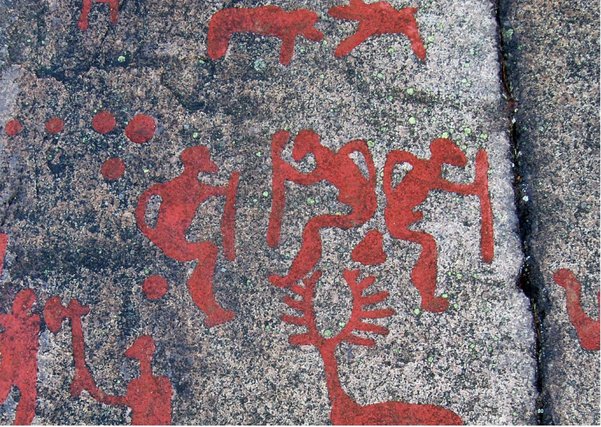 In book thirteen in the Iliad the Trojans attack the Achaeans’ ships and a fierce battle rages.

On his way to battle the old king Nestor came across the kings the gods sustain (Il.14-30):

- all the ones whom bronze had wounded – Diomedes and Odysseus, along with Agamemnon (Il.14-28).

- The kings had set out in one group together, each one leaning on a spear,

A shortened lance with guide ring in the end works perfectly well as a crutch for the three kings.

The battle is going bad for the Achaeans / Argives / Danaans and Agamemnon reconciles with Achilles who gets back his booty the girl Briseis (Il.19-246).

Odysseus, Menelaos and four fighters are hiding in the horse. The Trojans feel confident to gain victory and drag the sleigh into Troy and thereby signing their own death sentence.

King Menesthios from Arne is son of Areithous 2nd and Philomedusa. He is killed by Prince Paris from Troy (Il. 7-8). His grandfather was Areithoos 1st:

He has been dead for a long time and is therefore not included in the war against Troy.

In the Iliad they fight with swords, spears and arrows. Clubs are not mentioned as a weapon.