The Iliad in Fossum – The Danaans have corpse-eating war dogs

The Danaans have corpse-eating war dogs

Achaeans, Argives and Danaans from Seeland have corpse-eating dogs 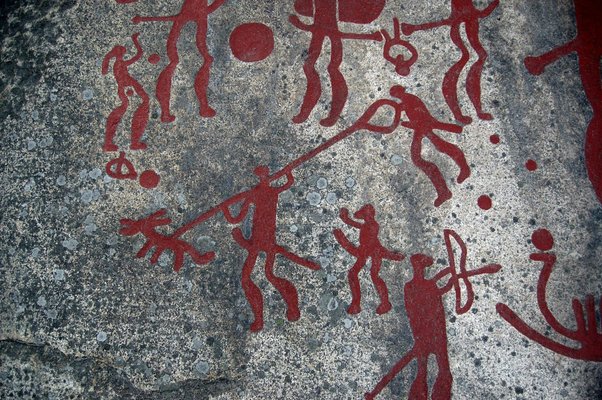 According to expertise can two trained men can kill a fighting dog as the rock carving shows.

- Hector gripped a spear eighteen feet long, its bronze point glittering there in front of them, and a golden ring around it (Il.6-319, 8-494).

There were wild dogs even inside Troy – Bergen on the island Rügen. King Priam pleads his son Hector not to fight alone against Achilles who will murder him and then all others in Troy.

- I’ll be ripped by ravenous dogs, in front of my own doors when some man strikes me with his sharp bronze or throws his spear in me (Il.22-67).

- When my own dogs disfigure shamefully an old man, chewing his grey head,

- Wriggling worms will eat you (Astynax) once dogs have had their fill of your bare corpse (Il. 22-508).

Achaeans, Argives and Danaans from Seeland have:

- I hope and pray to Zeus, to other gods as well, I’ll drive away

- these death-infected dogs, conducted here in their black ships by mortal fates (Il.8-527).

Both the Danaans’ war dogs and the ravenous Trojan curs will feast munching their owners and grandchildren's cadavers when Troy has fallen. No wonder that dogs are killed on rock carvings. The Iliad is macabre reading when we see the reality behind the heroic oratory.

There is barely enough food to the combatants and their support troops. Therefore dogs eat the dead fallen warriors.

Notice the steering ring at the end of the spear – a handle. Diomedes has the same type of lance.