The Iliad on rock carvings in Fossum in Sweden

The Iliad on rock carvings in Fossum in Sweden

See the entire Iliad on rock carvings in Fossum in Tanumshede

– The great Achilles (Egil) who will get a killing arrow in his heel - his Achilles heel.

– Hector with his long lance against the Danaans’ dogs which eat corpses.

– They are Odysseus, Diomedes and the commander Agamemnon (Il.14-28) 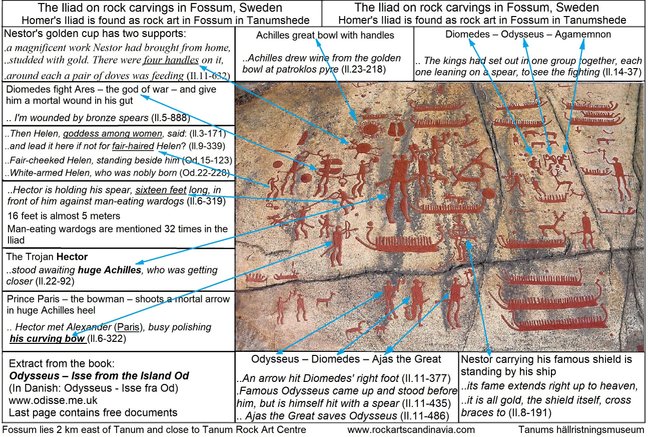 To the West lies the islands of Same and Samos (the two-piece Island Samsø), to the Southwest is Zacynthos (Hindsholm) and to the Northwest lies the mountain Parnassos (the cliff Fornæs 30 meters).

Take the trip to the South of the Baltic Sea to Troy (city of Bergen) on the island of Rügen.

Travel further South to Lake Tollensee and the high wall of Ilion (Bacherswall – wild boar rampart). This bank has protected the lost castle Rethra (the city of Ilion in the Iliad).

The lake has two sources and one source had steaming hot water year round in the Bronze Age: – hot water flows, and out of it steam rises up (Il.22-147,208).

Neu Brandenburg at the Lake's north side has a geothermal heating plant with 54 º hot water.

Go northwards to Tanum in Bohuslän and visit the rock carvings in Fossum.

Here you will find the entire Iliad as a work of art in stone.

The book Odysseus – Isse from the island Od, author John Esse Larsen, 202 pages, 24 maps and a comprehensive index. It can be purchased on the net, at the library or load it down as PDF file from Documents and Links.

One journey goes from Psyra/Psyria (Od 3-170) (Vestmøn) and past Syrø (Sejerø, King Valdemars Landbook 1231) and northwest up to Utsira west of Karmøy in Western Norway.

The second journey goes from Kypern/Kythira (Bornholm) and past the three islets – Kyholm at Enø in Dybsø fjord – Kyholm in Odense fjord – Kyholm in Stavnsfjord on Samsø (Samos) West of Odysseus's home on the island of Od, and Northwest up to Kyø holm in Nibe Bredning.

Both travels go from southeast to northwest straight through the area where the Odyssey and the Iliad takes place. The route goes past the island of Wolin in the southeast where the Viking Age Jomsborg was located. The journey continues to the southeast into the land east of the Oder (Odra) river and goes past the great strongly fortified settlement Biskupin on a former island in the Lake Biskupin South of Znin. The rampart is at 200 * 168 meters and some parts are reconstructed.

There are really many rock carvings in Bohuslän from the Bronze Age which due to the land rise at 13 meters since then often lies several kilometers into the country.

Southeast of Karmøy lies the island of Åmøy, with about 1000 rock carvings from the Bronze Age. Several hundreds of them are showing ships. The rock carvings on Åmøy show a contact between two economic and religious main directions, according to Anders Hagen, the Norwegian archeologist. The island was a central meeting place in the Bronze Age.

Sira, Syra and Psyra means island – and Utsira has in such a case the same name as the Swedish island of Utö. 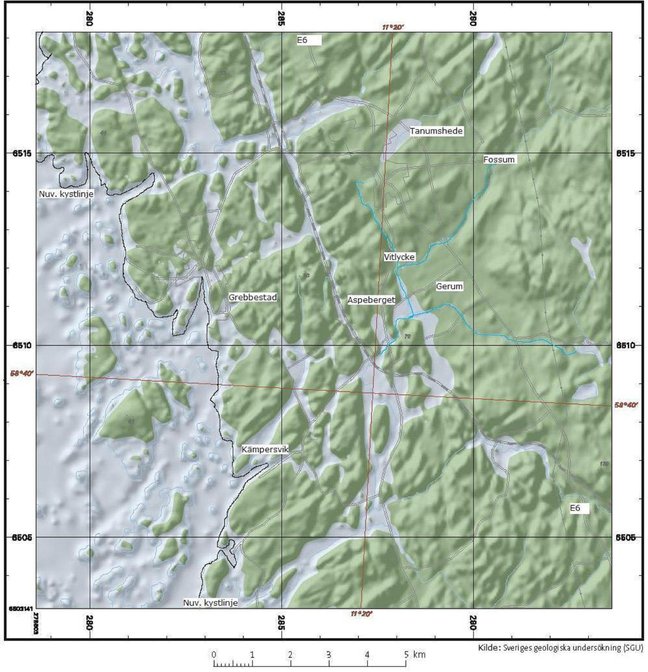 This map from the geological survey of Sweden (SGU) is showing Bohuslän for 3000 years ago before the uplift of 13 meters today. The current shoreline is marked on a map.

Here we can see an archipelago around 1200 BC, where Bronze Age seafaring traders and traveling theater groups are sailing as much as 6 km into the mainland of today.

Rock carvings in Gerum are located in the middle, and around them in an arc from northeast to southwest is Fossum with the Iliad inscribed into the rock, also Vitlycke, and Aspeberget and Tegneby.

Now the sea is gone and only the ships remain as memories carved into the rocks.

1.5 kilometer northeast of Kämpersvik is an ancient fortification on a high hill with a wide view over the landscape. This ancient rampart may have played a role as a lookout and defence facility by strife or as a lock for passing traffic on a northern route into the inland sea at Gerum.

The ordnance survey's terrain map 573 Fjällbacka shows that the former archipelago has been changed into forested heights in an undulating landscape.