Around 1250 BC a man is stranded on the Faroe Islands, perhaps in the far north on Østerø. Maybe he is a sailor who is driven ashore after a ship’s wreckage. Maybe he is an Irishman or a Cymric speaking Scotchman, or a man from the Danaan people. Anyway, he is in all cases first found after eight dismal years in total solitude.

–I drifted for nine days. On the tenth night,

–the gods conducted me to Ogygia,

Another place in the Odyssey the drifting tour has been extended:

A gjogv is a special type of natural harbor on the Faroe Islands. It is a deep cave or a special kind of cave-like deep and narrow coves. A gjogv is formed when the sea erodes and undermines the rock that is composed of several layers of tuff and volcanic ashes.

The word is pronounced djegf, djegef, jeack, much like the English pronunciation of the name George. Sometimes the word gjogv is spelled gjair. The Cymric word ogof means cave and burrow. It is pronounced ogov. It is included with the spelling ogoch in the world's longest station name Llanfairpwllgwyngyllgogerychwyrndrobwllllantysiliogogogoch.

It goes Llanfair ... ogoch. The name on the ticket is Llanfair.

The municipality of Gjogv on Østerø – in Faroese Eysturoy – has 65 inhabitants. You should not miss a trip to the distinctive natural Gjogv Harbor, located north-east of the highest mountain, at Slættaratindur 882 meters high, on the Faroe Islands.

Odysseus lives in the gjogv Ogygia where loneliness makes him more and more depressed and heartbroken:

–But Hermes did not find Odysseus in the cave –

–that great-hearted man sat crying on the shore,

–just as before, breaking his heart with tears and groans,

It is a vast ocean he stares out over – it is the North Atlantic. He was there for many years:

–I stayed there seven years, the entire time,

–Calypso gave me with my constant tears.

After eight years as a castaway, he is found by a Phaeakian – or Phoenician expedition on their way home from Iceland, Greenland or North America. They take him along home to their homes on Skeria, the Phaeakian islands.

The Greek historian Plutarch (c. 46 – 120 AD) tells of a Lunar Eclipse in his book De facie quae in orbe lunae apparat – About the sight of the Moon. The scripture is not preserved in complete form. Here he mentions that the island of Ogygia is found in the Atlantic five days of sailing west of Britain.

We can speculate here that the ancient people mean Ireland here. Five days of sailing to the west rather leads to Iceland.

In Plato's dialogue Timaios, the priests tell Solon about the great island of Atlantis:

For in front of the mouth which you Greeks call, as you say, 'the pillars of Heracles,' (Gibraltar) there lay an island which was larger than Libya and Asia (Libya is Africa and Asia is Asia Minor) together; and it was possible for the travelers of that time to cross from it to the other islands, and from the islands to the whole of the continent over against them which encompasses that veritable ocean.

Here we will show that the island is the remains of Wade-land (Danish Vadehavet), the other islands are the Danish Archipelago in the Belt Sea, and the mainland is Jutland.

On this island called Atlantis and a large Power ruled this island, the islands around and parts of the Mainland.

Such a large Wade-land (Danish Vadehavet), or Low Saxon Watland in the Wattenmeer, may be the original Island Atlantis, in Greek Atlant-is. 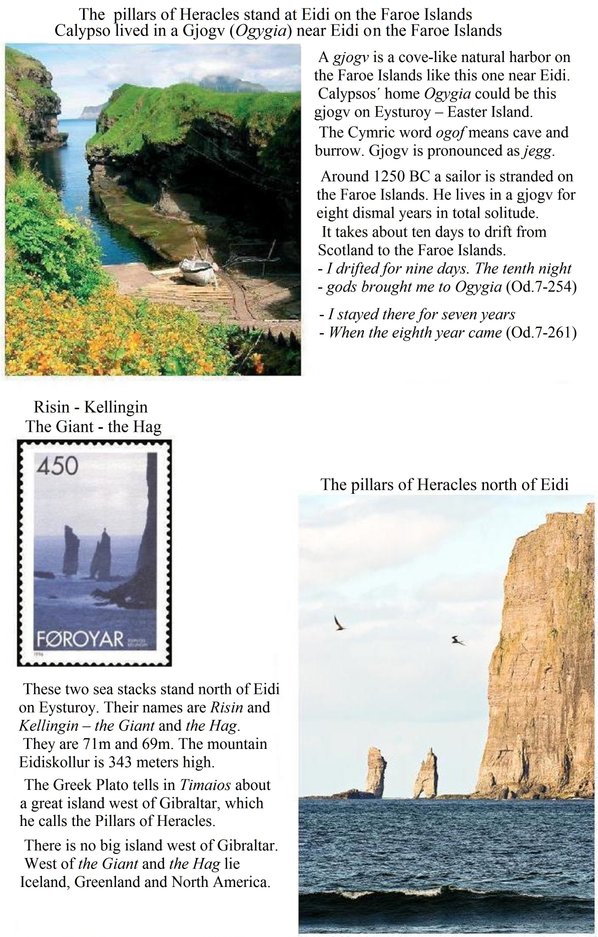