The Solymi mountain Stenshuvud in Scania

The Solymi mountain Stenshuvud in Scania 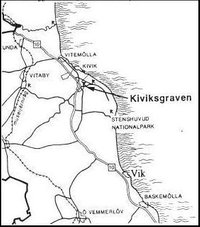 It is also goes wrong for Odysseus in the same storm. He is knocked off course and driven on a raft to the Phaeakian island of Gotland. The goddess Calypso advises has him to keep an eye on the star constellation the Great Bear also called Charles' Wain and:

– Calypso, the lovely goddess, had told him to keep this star

This course will lead Odysseus directly from Seeland to Gotland – country of the Gutes – formerly named Gutland. In the waters between Bornholm and Österlen in Scania the god Poseidon gets a view of Odysseus:

– But at that moment, the mighty Earthshaker Poseidon,

– returning from the Ethiopians, saw him

Both Menelaos and Odysseus are passing between Scania and Bornholm, or Kypern as the island is called in the Odyssey. Poseidon sees Odysseus from the Solymi hilltop.

The Solymi Hilltop is Linderödsåsen that ends at the sea in the east with the 124 meters high cliff Stenshuvud. An old local name is Stenso from the name Stenhaug.

Stenshuvud is situated 55 kilometers northwest of the 91 meters high rock Hammeren on Bornholm. In clear weather, one can catch a glimpse of Hammeren from Stenshuvud, which is a known landmark for seafarers, and it is from there the sulky Poseidon sees Odysseus on a raft and sends a new storm against him.

On top of Stenshuvud at the 97 meter high Norra Huvudet there is a 270 * 280 meters large ancient Hill Fort. The Hill is very steep to the West and North, and a little less steep towards the coast in the East. The stone embankment to the South is between half a meter and 4.3 meters high and 270 meters long. 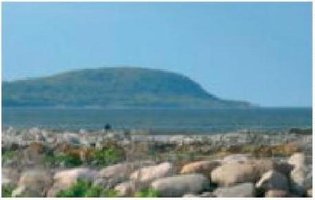 The Odyssey begins when all the gods are gathered with Zeus on Mount Olympus, all except Poseidon.

– But at that moment, Poseidon was among the Ethiopians,

– a long way off, those same Ethiopians,

– the most remote of people, who live divided in two different groups,

– one where Hyperion goes down, the other where he rises.

– bulls and rams—and was sitting at a banquet, enjoying himself.

– But other gods had gathered in the great hall of Olympian Zeus (Od.1-22).

Hyperion is a sun-deity in Greek mythology.

North of Stenshuvud – the Solymi Hilltop – lies the Kivik Tomb, a large burial mound from the Bronze Age with a fascinating history. The mound is 75 meters in diameter and is built of large stones. It was used for a long time used as a quarry. Exploitation was stopped and in 1931 the mound were rebuild as well as could be done. The chamber in the middle has ten large stones as sides, two gables with no engravings and four stones on each side with engravings. 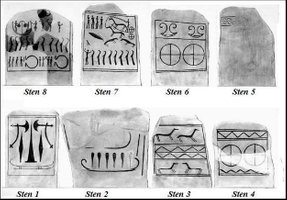 Stone seven and eight have rock carvings which belong together.

When we know that Poseidon:

– Poseidon went there to receive a sacrificial offering (A hecatomb) to him (Od. 1-25)

Then we understand most of the images on the stones seven and eight.

At the top of the stone seven we can see four men who are receiving Poseidon. He is arriving on a two-wheeled cart pulled by two horses. The 3200-year-old Kivik Tomb has the world's oldest depiction of Poseidon.