The Trojan people River Maiandros and river Scamander in Pomerania

The rivers Maiandros and Scamander in Pomerania

The river Scamander is definitely the stream Tollense in Pomerania that meets the small river Peene – Maiandros at the town Demmin south of the city Greifswald by the Baltic Sea. Both the river Peene and Tollense River have a highly crooked run. They meander after the Latin name Meander from the Greek name Maiandros.

In 1996 a battlefield from the Bronze Age was found here at the river Tollense north of Altentreptow. The mass grave is located on the left bank approximately 240 meters from the castle ruin Conerow located 2.4 kilometers west of the village Wodarg.

It all looks like song 20 and 21 in the Iliad where the Danaan Achilles slaughters 22 trojans and throws those killed in river Scamander which the gods call Xanthos.

The lost legendary fortress Rethra lies behind Bacherswall – wild boar bank – immediately south of Lake Tollensee. Rethra can be Ilion and the embankment is then the high wall of Ilion:

– Just as a mountain falcon, the fastest creature of all the ones which fly

– in just that way Achilles in his fury raced ahead.

There were also two springs (Il.22-147,208) where one spring had steaming hot water all year round in the Bronze Age.

The river Tollense in Pomerania is the river Scamander 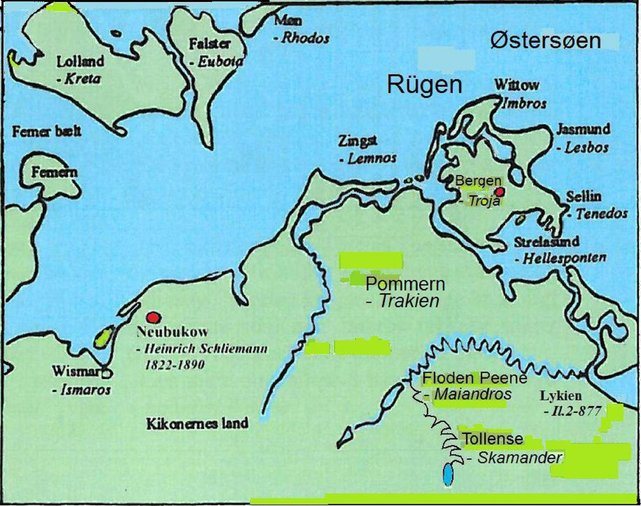 Lake Tollensee gets its water from the south from two inlets. They run into the small lake Lieps located about 200 meters south of Lake Tollensee. Lake Lieps is 3 km long and 2.5 km wide.

One inlet is the creek Ziemenbach which is 8 kilometers long and has a drop height of 54 meters.

The second creek is Zippelower Bach (Eichseebach) which is part of the nature park Zippelower Bachtal. It flows through two kilometer long and 120 meters wide meltwater channels. They are surrounded by fells. There have been found 13 dolmens from the Stone Age here.

Here at the outlet of Lieps into Tollensee is a Sorbian rampart Bacherswall – wild boar bank. Around here is also located the sunken and missing legendary fortress Rethra.

– which feed swirling Scamander’s stream. From one of them

– hot water flows, and out of it steam rises up,

– as if there were a fire burning. From the other,

– cold water comes, as cold as hail or freezing snow

Though the two streams have had different temperatures is not known today after 3200 years. The possibility exists, and according to the Iliad, it was just like that.

And then there is no ice on the streams and rivers in Greece.

Tollensee (Tollen Sea) is a 10 km long and 3 km wide lake with a maximum depth of 34 meters and an average of 17.6 meters. Here, the Germans had a test station for torpedoes during World War II.

The town of Neubrandenburg on the Lake's north side got East Germany's first geothermal heating plant in 1989 with water from the underground with a temperature of 54°C.

If this 54º degree hot water has gone into the daylight during the Bronze Age in one of the creeks, we have the explanation of the hot and steaming spring water in the Iliad.