Thebe – the town Tczew in the Wisla delta

Thebe - the town Tczew in the Wisla delta

All cities and Islands in the Odyssey and the Iliad lie in the Danish archipelago and the coasts all around. The Phaiakian country, the island of Faros and Egypt is located furthest to the east and northeast, calculated from the steep crag of Malea – Stevns klint.

The Phaiakian country is Gotland, the isle Faros is Fårö north of Gotland or Gotska Sandön, and Egypt is the river Wisla delta and the country around.

When the commander Menelaos is on its way up through the Sound (Øresund), his coxswain Frontis dies of a heart attack. After the funeral, they sail on, apparently during the evening. Here they meet a storm with howling winds and the fleet is split in two:

– and quickly reached the steep crag of Malea (The cliffs of Stevns),

– then far-seeing Zeus carried out a scheme to make his voyage dreadful.

– He sent down blasting winds and immense waves, like mountains.

Crete is the same as the island Lolland.

The other five ships are also beaten totally off course and the storm is blowing Menelaos to Egypt (Od.3-299) by Wislas’ delta, and a following storm from the south sends him up to the north of Gotland to Faros, Fårö (Od.4-355). Here a prolonged western wind keeps him and his men as shipwrecked on Faros in 20 days (Od.4-360) before the wind turns and he manages to get back to Egypt in Wislas’ delta (Od.4-482). The river of Egypt is the Wisla River in Poland (Od.4-477).

Using modern names for the Islands the situation will be this:

Sailing from Rügen and past the rocky island Bornholm to the river Wislas’ delta. From there they are blown to the north of Gotland and the island Fårö, and after twenty days back to the River Wisla in present-day Poland.

The storm from the west is blowing Menelaos to Egypt, Wislas’ delta.

– The wind then drove five other dark-nosed ships

A sharp wind from south is driving him further on to the island of Faros – Fårö.

– Now, just in front of Egypt there’s an island,

Menelaos and his men are stalled for twenty days.

– For twenty days the gods detained me there.

A storm is pushing Menelaos in a straight line from Troy and past Kypern to Egypt. From there a later southern storm sends him to the island Gotska Sandön north of the Phaiakian.

The same storm throws Odysseus from Troy and up to the Phaiakian island Östergarnsholm east of Gotland. 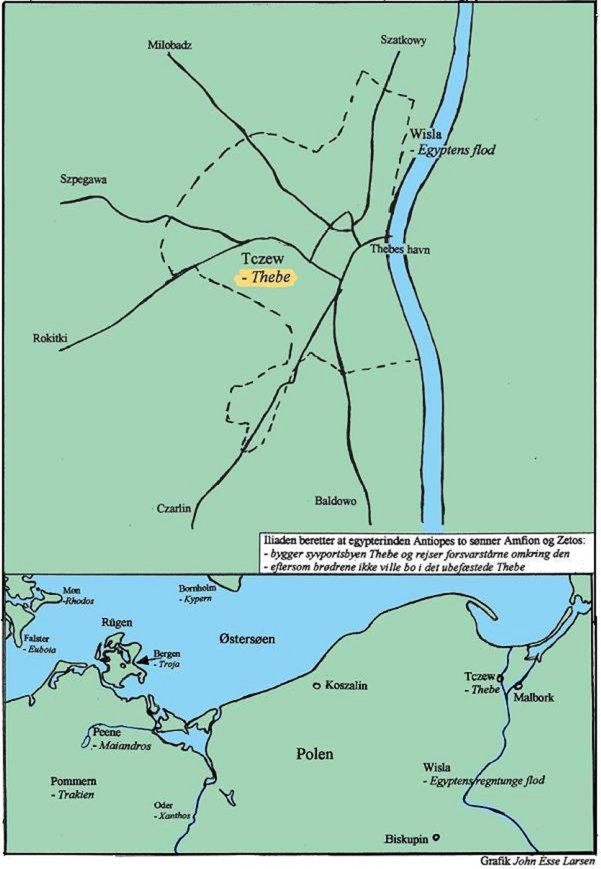 The Odyssey tells us that the Egyptian woman Antiopes had two sons, Amfion and Zetos:

– constructing walls around it—for all their strength,

– they lacked the power to live in spacious Thebe,

The divinely beautiful Helen has a girlfriend:

The town Thebe from the Iliad and the Odessey with seven exit roads still exists. It is the town Tczew by Wisla 25 kilometers south of Gdansk. The name Tczew is pronounced closely like English Chef and German Schäf.

The town of Tczew – or the old Thebe – has two exit roads south to Czarlin and Baldowo, two westward to Rokitki and Szpegawa, two up north to Milobadz and Szatkowy, and one towards the east to the city harbor and former crossing point over the river Wisla.

We can therefore rightly assume that the seven gate town Thebe lies here under Tczew.

Tczew is mentioned for the first time year 1198.

In the years leading up to 1857 Prussia builds a railroad from Berlin to East Prussia. A big bridge is build over Wisla at Tczew – in German Dirschau– and a second bridge over the river arm Nogat at the castle Malbork twenty kilometers to the east. The bridges are still in use.