Troy – the town Bergen on the island Rügen

Troy - the town Bergen on Rügen

Troy is the city Bergen on Rügen and the hill Batieia (Blackberry Hill) is the 90 meter high hill Rugard overlooking most of Rügen, for example the plain in the Northwest and in the Northeast the lagoons Jasmunder Bodden. At Grosser Jasmunder Bodden we find the landing place Ralswiek, where there is an open-air theatre with seatings for 9000 spectators. The Iliad describes the first Danaan attack against Troy (Il.2-785), that with brisk steps they marched across the battlefield, a distance of five kilometers, and maybe from the slopes at Ralswiek.

The Dardanian gates are mentioned three times and once like this:

– Every time he tried to dash for the Dardanian gates

This places without any doubt the Dardanian gates by the street junction Dammstrasse, Schulstrasse and Joachimsberg. Here you can see the gray limestone mountain which Bergen is built on.

There is built a crest over the Scaean Gates.

The Scaean Gates are clearly a gathering place and junction.

– Hector pulled his sure-footed horses up beside the Scaean Gate (Il.16-712).

The Trojan horse and Odin's eight-legged horse Sleipnir in Norse mythology is the same horse. The wooden horse was dragged into Troy as a boat on a sleigh. The tour begins outside the Am Burgwall – castle wall – the Scaean Gates – and 400 meters through Vieschstrasse to the nowadays marketplace Markt in Bergen.

– ... that very day when Paris and Phoebus Apollo slaughter you (Achilles),

Such an important gate is the logical place to drag the Trojan horse Sleipnir up to. It is therefore a reasonable thought that the Scaean Gate is the crossroad Vieschstrasse and Am Burgvall.

Homer's alternating between the names the Scaean Gate and the Scaean Gates may have its explanation in the Lithuanian words skaicius meaning number – total, and the word skaistus meaning bright, clear, brilliant, elevated, high, etc. In this case, the name the Scaean Gate means the high shining gate or the high luminous ports.

Troy is the city of Bergen on the island of Rügen 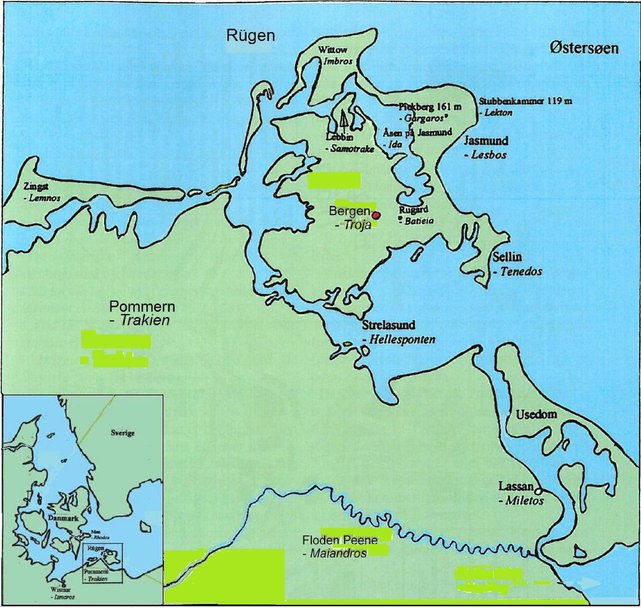 The Danaan Epeios constructs the Trojan horse and the goddess Athena helps him.

In Norse mythology, Svaðilfari (Old Norse ‘unlucky traveler’) is a stallion that fathered the eight-legged horse Sleipnir. Sleipnir means the one which gets dragged, from old Norse sleipr – drag, slippy.

Now we know that the Trojan horse has the name Sleipnir and that it was dragged into Troy. We also know that it is depicted on a picture stone from Tängelgårda in Lärbro parish on Gotland.

The wooden horse is probably dragged the 400 meters from the existing car park at Rugardweg through the city wall and further through Vieschstrasse to the Markt in Bergen.

The victory secure Trojans are otherwise discussing if they shouldn’t drag the eight-legged Sleipnir the last 100 meters to the fifteen-meter-high steep Mägdesprung:

They decide that they want to take it into Troy – into Bergen and to the square Markt.

That becomes their death sentence. 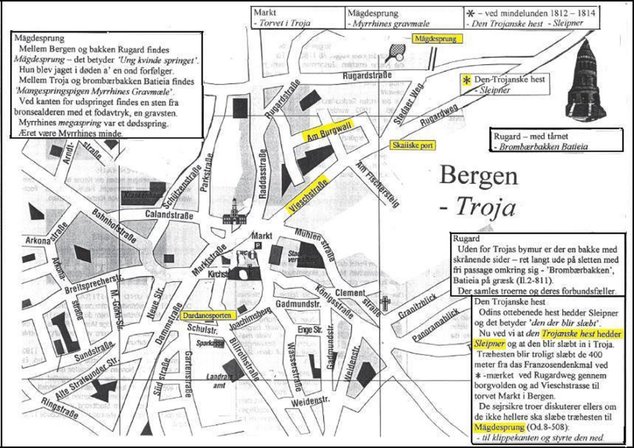 – In the plain outside Troy, some distance off, a high hill stood by itself,

– right before the city. People call it Batieia (Blackberry Hill),

– but the gods know it as the tomb of swift-footed Myrine.

– Here the Trojans and their allies marshalled forces.

Who the swift-footed Myrine is no one knows.

Between Troy and the hill Batieia (Blackberry Hill) which is the swift-footed Myrine’s tomb.

Between the city of Bergen and the hill Rugard we can see the place Mägdesprung – it means young woman leap.

A folk tale in Bergen says an evil nobleman pursues a young woman to get his desire with her. During her escape, she is chased out over the edge of the steep and gets killed upon the impact fifteen feet below.

The swift-footed Myrine was likely a noblewoman.