Odysseus – Isse from the island Od in Denmark

The Odyssey and the Iliad take place around 1230 BC around Seeland and the southern Baltic Sea.

Odysseus was born circa 1260 BC on the former island Od in North Zealand – from there comes his name Odisse – in Greek Od-ysseus.

The island Od is located at the northern part of Seeland in Denmark. A dam from Seeland connected the island Od with Seeland in 1875 and dries out Lamme fjord.

Odysseus lives opposite the islands Same and Samos – that is the two-piece island Samsø (Od. 4-844).

Upon his return after the war, he goes ashore near the spring of Arethusa – Tuse River in Od county. 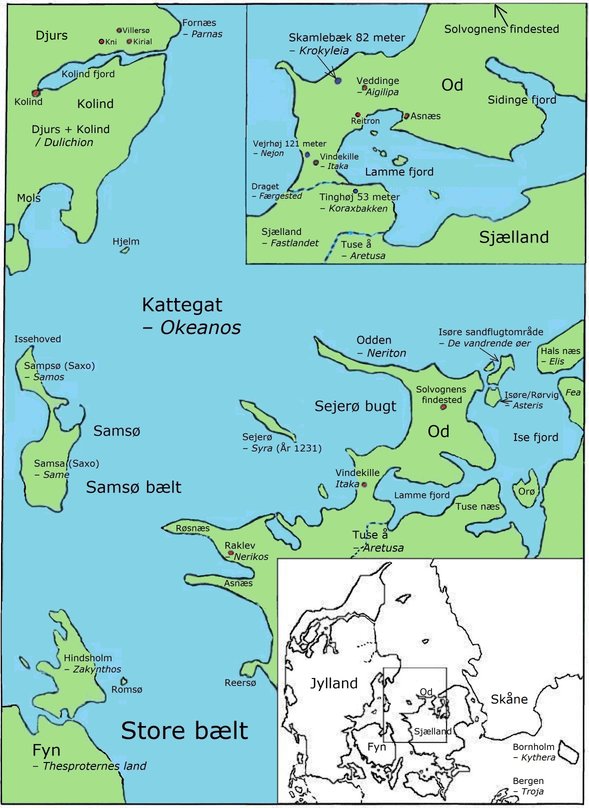 The name Odysseus means Isse from Od. He was born about 1260 BC on the island Od, which is located at the North-West of Seeland in Denmark. Nowadays Od is connected with Seeland and they form a branched peninsula called Od County. The islands Od and Seeland have grown together by dams at the two fjords Sidinge Fjord and Lamme Fjord.

In the innermost part of Sidinge fjord between the towns Vig and Højby the Trundholm sun chariot (Danish: Solvognen, the Sun Waggon) is found in 1902.

A 1470 meter long flat dam over Sidinge fjord is broken by a storm on 2. January 1855. Then the dam is reinforced and the partly dry fjord is now completely drained dry.

The inner part of Lamme Fjord was more than 20 meters deep and has over the years been filled up with silt soil that is not sustainable for construction. Trucks passing on Skovlyvej through this part of Lamme Fjord always drive uphill, the fjord sinks that much when heavy loaded trucks drive there.

To the South about 500 meters from Vindekille (Vindekilde) is Draget, a former ferry berth for crossing over to Sealand. It is mentioned in the Odyssey (Od. 20-187) that freight people ferries people and cattle from the mainland Seland to the island Od and Itaka, as soon as anyone wants to.