Watland in the North Sea – Atlantis

Watland in the North Sea - Atlantis

Such a large Wade-land (Danish Vadehavet), or Low Saxon Watland in the Wattenmeer, may be the original Island Atlantis, in Greek Atlant-is.

We are familiar with the W– being glued on before a word like Ismar-os in the Odyssey, which is today's Wismar at the Baltic Sea. We also know of the W– from the Nordic words as ord and orm, written word and worm in English.

The Greek historian Plato lived 427 – 347 BC. He has written two dialogues – the short Timaios and the longer Kritias, both of which describe the destruction of the great nation of Atlantis.

In Plato's short dialogue Timaios, the priests tell Solon about the great island of Atlantis:

For in front of the mouth which you Greeks call, as you say, 'the pillars of Heracles,' (Gibraltar) there lay an island which was larger than Libya and Asia (Libya is Africa and Asia is Asia Minor) together; and it was possible for the travelers of that time to cross from it to the other islands, and from the islands to the whole of the continent over against them which encompasses that veritable ocean.

There was an abundance of wood for carpenter’s work, and sufficient maintenance for tame and wild animals. Moreover, there were a great number of elephants in the island; for as there was provision for all other sorts of animals, both for those which live in lakes and marshes and rivers, and also for those which live in mountains and on plains, so there was for the animal which is the largest and most voracious of all.

This is like a description of the fertile and lush islands of Funen (Danish Fyn) and Seeland in Denmark, close to Watland. The Egyptians didn’t know what an elk – a moose is, they call it an elephant.

The short dialogue Timaios ends the tale of Atlantis with: 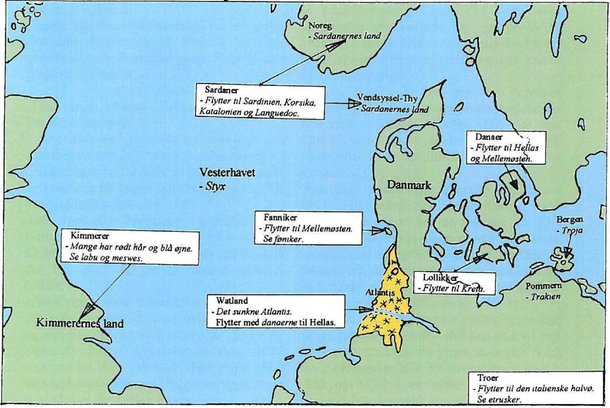 The old Atlantis is the nowadays Watland and Doggerland with approximately 275,000 square kilometers. This is more than the United Kingdom, and the same size as Ireland, Belgium, the Netherlands, Portugal and Denmark combined.

The present warm geologic age is Holocene which began about 11,700 years ago, after the Ice Age. At that time, the land masses Watland and Doggerland were as most 120 meters below today's ocean surface. A combination of slow land rise and fast rise of the sea have created today’s situation in the North Sea.

The recurrent floods have created the myth of Atlantis.

The map shows the probable extent of Doggerland around 10,000 BC, with the surrounding lands shown with their current extent.

The little dialogue Timaios ends the tale of Atlantis with:

It is true that because of the shoal mud they couldn’t sail in Watland – Wade-land – which lies over the island created. That is north of Wat-land. The Wade-land is the world's largest area of this type. The area is awash with tides, and then laid free at low tide.